The Humbling Side of Motherhood

I love having a big family.  I’ve learned, though, that it comes with some pressure.  Perhaps the pressure is purely a figment of my own mind, but I feel it nonetheless.  For some reason, I feel like BECAUSE I am raising a lot of children I have to always be a little bit MORE on top of things than most people.  Not that I am, mind you, but I feel like I should be.  I feel like I have to do a better than average job to justify our numbers.

At the same time, I have a strong desire to be real.  I’m not superwoman, and see no need in having others view me as such.  I’m a regular Mom raising a regular family.  I’m doing my best.  I’m good at some things and stink at others.  I want to be genuine.  What’s the point of being anything else?  (Which is why I’m willing to share the following experience.)

Well, today I did something that would certainly qualify me as the Mom that makes people think that big families are not a good idea.

It involves this beautiful little girl.

She’s my cute little kindergartener and I love her with all my heart.

Here’s my story.  Every day after school, I pick my children up at a park nearby the school.  We pulled up to the park and she asked if she could get out of the car and play.  I said no.  She sat there with the door open,  just hanging her legs out of  the car.  When the big kids walked up, she slipped out of the car and ran to play.

The car already felt roomy because my oldest had stayed after school to work on something.  Sometimes when someone is missing it messes up my sense of who’s where.   Now, I’m not using this as an excuse.  It’s just that I’m still adjusting to counting eight heads.  I’m also adjusting to this five year old being mobile in the car, as she recently moved from a carseat to a booster and she’s experimenting with unbuckling her seat belt every time the car stops.  I’m used to her being pretty immobile in the car,  so I don’t really think of her as one I need to keep track of once we’re all packed up.  That is, I didn’t think of her that way until today.

The big kids got in.  I looked in the back.  I didn’t see my 5 year old’s head, but I thought she had fallen asleep like she often does when we’re driving in the afternoons, so I didn’t think anything of it.  That should have been my clue.  I didn’t remember that she had just been hanging her legs out of the car.

No.  Instead I thought, “They’re all asleep.  Hooray for me.”  And we drove away.

And all I can say is, I’m on my way.  I called my husband, who works 2 blocks from the school.  Of course he beat me there.

She is safe.  We’re so thankful.    But she got in someone’s car!  A complete stranger!  She was totally frightened.  Of course she was crying.   I met my husband at his office and we hugged her and I told her how sorry I am and we hugged her some more.  The tears kept sneaking back to the surface because she was so frightened.  And I kept thinking things like, she knows my phone number, but that’s when she was calm.  She’s never tried to remember my phone number when she was scared to death.  We’ve talked to her about what to do around strangers but that was when she felt safe.  She’s never tried to handle it when she was alone, and panicked.  I picture my petite little daughter, crying, alone, and all of the horrible feelings she must have felt in a place far from home.  It’s the sort of experience when you need your mother, and not only was her mother nowhere near, but her mother was also the one who caused it!

Ouch.  I feel so, so bad.  And I feel so, so thankful that she was protected.  So grateful for a God who watched over her when her Mom wasn’t doing such a good job of it.

I brought her home, and my heart nearly broke at the sight of her tear-stained face and puffy red eyes. 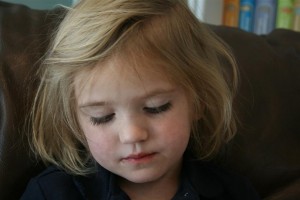 Do you know what that sweet angel did?  She told me a joke.

“What does a ghost have for lunch?”
“A Booloney sandwich!”

And then she giggled. 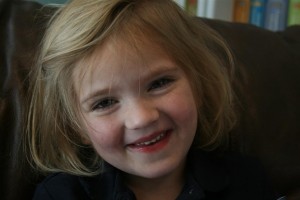 My heart burst with love.  She forgives me and is ready to move on. 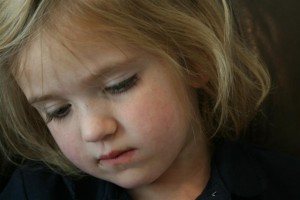 I love you, sweet thing.