Why?  Well, I happen to love history, especially American History, and so there are just some dates I pay attention to, like February 12, 1809.

Anybody know what happened that day?  It was Abraham Lincoln’s birthday.  Which means that February 12, 2009 marked the 200th anniversary of the birth of one of our nation’s most influential leaders.

So here’s how it went.  I started mentally planning the celebration about 9 months in advance.  I won’t bore you (or perhaps make you laugh) with details of the wonderful things I envisioned and the number of people I planned to involve.  And then, about 3 1/2 months before the party was to occur, I got pregnant with baby number 8.  This means, of course, that suddenly I was so tired that I was afraid I’d fall asleep at the wheel driving kids to and from school.  It means that suddenly I was buried under a mountain of housework that wasn’t getting done.  And the closer the calendar crept to February 12, 2009, the more sad I felt.  I just couldn’t pull it off, unless my family agreed to just quit eating and wearing clothes for a month or so.  Which, of course, didn’t happen.

By the beginning of February I was feeling like perhaps I should just scrap the whole thing, but I knew that I’d never forgive myself, that I won’t be around for the 300th anniversary, that I’d always be sorry I didn’t try.  So I threw something together (a sorry shadow of what I’d envisioned), invited a couple of families to join us, cooked up some hoecakes (his favorite breakfast) and went for it.

It was ok.  I mean, how many people thought to have a birthday party for him anyway?  But I felt a little sad at not being able to do what I’d dreamed.  Still, it worked out, and at least we paused and marked the day for our children.

And I’d found these: 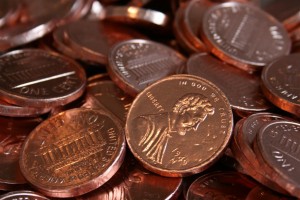 They look like pennies, don’t they?  They’re not.  They’re chocolate coins, and they’re more than 1.5 inches in diameter.  And, they taste much better than any chocolate coin I’ve ever tasted.  When I saw them for the first time at a little children’s museum in Temecula, California, I was smitten.  I had to have them for my party.  I had to have them so badly that I was willing to order 10 POUNDS of them, because that’s the only way to get them!

I liked using the penny as the symbol for our year for two reasons.
1.  Because they have Lincoln’s profile on them, and this is the year of his 200th birthday
2.  Because one of the great lessons of Lincoln’s life is that one person makes a difference.  Small efforts yield results.

It’s so easy, living in today’s world, to feel like one person doesn’t matter, can’t do much, won’t be enough.    That’s kind of how pennies are, too.  Just one penny isn’t worth much, can’t buy anything, doesn’t matter.  In fact, inflation has made the penny so worthless that the US Mint has considered ceasing to make them.  Pretty worthless, right?

Wrong.  Last I checked, 100 pennies still add up to one dollar, and 1000 pennies still make $10.  “Out of small things proceedeth that which is great.”  I kind of like having Lincoln on the penny.  It seems to me that they both stand for the same thing.  And it’s a principle I really want my kids to understand and live.

We used these chocolate pennies at our party, and I still had a ton of them left.  So I’ve been using them all year long with my children as a reminder of the power of one person, one act of goodness.  It’s been kind of fun to have this year-long theme weaving itself through our lives.

Fast forward to a week ago.  I was wishing that we could just skip Halloween and go straight into November.  I really love Thanksgiving, and I was dreaming of all that I’d love to do for the holiday.  Suddenly it hit me that November would be the perfect time to use our pennies again!

Thanksgiving is a holiday which we usually celebrate by remembering our Pilgrim heritage.  But did you know that it wasn’t a national holiday until President Lincoln issued  a proclamation calling for a national day of Thanksgiving in 1863?  What better year to remember that we have him to thank for the holiday than 2009?  (If  you’d like to read the text of the proclamation, which I personally find inspiring, you can find it here.)

Thus was born our Thanksgiving Penny Project.  Each day between now and Thanksgiving, our family will award two Thanksgiving pennies to individuals who have been observed that day doing something positive that makes a difference in our family or in someone’s life.  After being awarded a penny, that person is responsible for selecting the next day’s recipient.  So, we’ll have the children awarding pennies, and a second penny will be awarded each day by the parents.  In addition to giving a penny, at the same time we will place a penny in a  jar and write down on a little notepad the person who received a penny and why.  Then, on Thanksgiving we’ll have a lovely jar full of pretty little copper pennies to use in our Thanksgiving celebration and a list of  blessings we’ve given each other throughout the month. 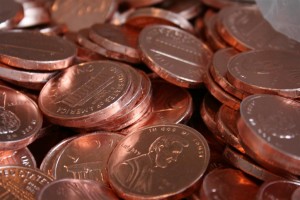 Today we also bundled up notepads and bags of Thanksgiving Pennies, along with a copy of Lincoln’s proclamation and a letter explaining our project and delivered them to some families we love.   We hope that they will also enjoy a Thanksgiving Penny Project like ours, and that they’ll let us know how it turns out.  I love Thanksgiving so much, and Abraham Lincoln too, that I wish I could bundle up these adorable treats and send them to everyone I know!  Anyone who wants them!  My first thought included a trip to the post office, but since I still have Christmas gifts I never mailed last year, I crossed that part off my list pretty quickly.  My second thought was to do a giveaway here on my blog, which would mean that IF one person stumbled upon my post, they’d have oh, about a 100% chance of winning, but I’m not sure I have the confidence to do that, so it hasn’t happened.  I figure if anybody finds this and is dying to have some chocolate pennies, please contact me and I can help you out.   So, (not that anyone’s reading this) if you want to start a Thanksgiving Penny Project of your own, grab a roll of pennies and a pretty glass or jar, and get going!  Just be sure to write it down.  It’ll only cost you a few pennies, but it just might add up to a holiday season brimming with gratitude for the simplest of gifts:  individuals.