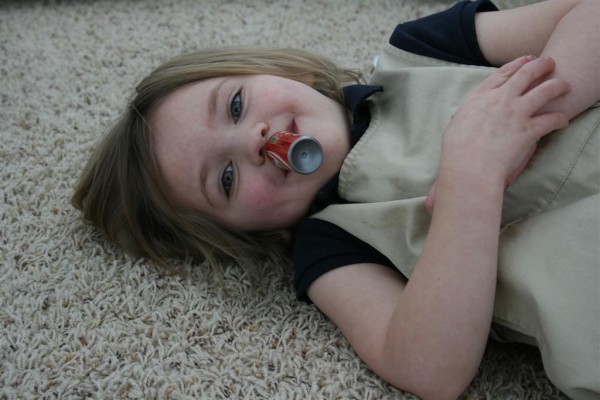 It all started this afternoon.

I was making dinner, Mr. Wonderful was taking a much-deserved Sunday nap.  The children were upstairs, supposedly having quiet time in their respective bedrooms.  Is it too much to hope that some quality reading could take place somewhere in there, too?  Slowly they gravitated to the bedroom of the oldest, and thus began a new Olympic event.

Tech Decks.  They started taking turns doing tricks on the Tech Deck half-pipe and giving each other scores, similar to the snowboarding half-pipe they watched 10 days ago.  Medals were awarded, and I believe there might have been just a TAD bit of disagreement about some of the judging.  It’s very subjective, you know.  I knew what they were up to and let them do it, remembering that other world of childhood memories from my own life, the world that happens when it’s just the kids together, doing whatever their imaginations dream up, outside of the involvement of their parents.

We ate dinner together.  It was relatively normal, with someone refusing to put much of anything on their plates, and at least two others enjoying the experience of decorating their plates with food and then deciding they weren’t hungry.  Most of the rest ate a decent meal, and it was time to clean the kitchen.

That was when the first signs of extreme silliness crept into my consciousness.  Suddenly there was a small contention brewing and in an attempt to diffuse it I started singing a song, inviting them to join in.  My oldest daughter suggested the next one, and soon all of the children were singing a lovely song about faith in Jesus Christ when my oldest began accompanying their performance with “weeumbaweha” every couple of lines (think In the Jungle the Lion Sleeps Tonight).  What do you do?  Laugh.  What else can you do?

Things went steadily downhill from there.  Fast forward to bedtime, and we’re playing Whack-A-Mole with them, trying to get them all in bed to stay.  One is crying, one is on her bed pretending to be a cow that trips and falls, one is complaining that it’s waaaay to early to go to bed, and the others are just in some general pattern of get off bed, go to bathroom, get distracted doing something else, back to bed, repeat.  Finally they were all in bed and it was time to feed the baby when from one bedroom began the “chirping” of a “bird.”

I asked my husband, “Were you aware we had canaries?”  And we burst out laughing.  Then one daughter pops out of bed to give us a handwritten note about how we’re “Laffy Taffy’s”.  Someone else suddenly has a split fingernail and wants some superglue, and another decides to start calling us on her cell phone as she walks down the hall to check it in for the night.

And when it’s all over, I realize that I feel like the Mom who just threw a birthday party.  You know, the kind when a couple of kids turn the action up a few notches, and the noise levels continue to rise until you wonder if you’ll have a nervous twitch when the day is over.  They run, jump, eat, play, run some more, laugh, yell, scream, play games, run some more, and then all of a sudden their parents come pick them all up and you smile and thank them for coming and shut the door and sink down in a chair in a state of  exhaustion.  You think how crazy it was and how tired you are and how fun it was and how glad you are that it’s over.  And how nice it is that birthdays only come once a year.

Except that it wasn’t a birthday party.  Nobody came to pick anybody up.  They’re all my own kids, and I get to do this again tomorrow.

And you know what?  I’m looking forward to it.

Oh yes, the days are long, but the weeks, months and years fly by.  The stage I’m in feels awfully hard a lot of the time, but I know it won’t last and someday I’ll miss the silly antics of childhood.  So you sweep the floor, pick up the stray toys, pray for wisdom and perspective, and essentially reset it all for another day.  And while you’re busy just absorbing them for what they are now, they’re quietly, almost imperceptibly changing.  Then one night you go from room to room to look at them all as they sleep, to kiss their foreheads no matter how big they are, to marvel at how little some of them look and how some of the others fill their beds more than you realized, and you wish you could just pick them each up and rock them in your arms like you did on the day you first met them, and you wonder….

could life POSSIBLY get any better?

Oh what a privilege, this adventure called motherhood.  Hang on, you’re in for the ride of your life!