Ouch.  It was hard to type that number.

Earlier in the year I felt excited as my report numbers got higher, feeling a little bit amazed at myself for not missing a single week. The last month or so has been different, for I feel unprepared to have the year end.  In many ways I have accomplished a lot, but there is so much more I had hoped to do in 2010.

This week’s report should really be titled “Adventures in Mothering”, for that pretty much sums things up.  Every one of my children have thrown some curve balls this week.  First came the boy who said he was sick when it was time to go to school (but who, of course, wasn’t.  How did I forget the rule we have for him that you only stay home from school if you’re running a fever or have already thrown up?).  There really isn’t a way to add up time spent holding an ornery, teething baby or the number of minutes spent in the bathroom with a charming two year old.  You’ve heard about Little Mister Mischief, who was at it again today with homemade play dough colored with red kool aid smashed into my carpet.  His generous sister, who received it at Church, didn’t think about what would happen when she shared it.  We’ve had an eight year old in almost constant emotional meltdown and a six year old in eternal whining mode.    We’ve had light bulbs smashed, a free-standing chalk board (which I love) destroyed, glass broken,  messes made, falls down stairs, fights, lost shoes, you name it.  It’s been a wild week.  I’m not even going to start on the hours of headaches brought on by my very-frustrating-right-now-but-full-of-long-term-potential-if-I-don’t-kill-him-first teenager.  (Did you like that one?)  And just in case you think I’m exaggerating, my husband will confirm the truth of the list.  I am exhausted. And all this while I’m supposed to be getting a million things done.

The first week of December felt so full of the spirit and my heart was so optimistic for the month.  This week has squashed it somewhat.  My children have made so many withdrawals without many moments of peace and calm that I’m feeling like a well that’s gone dry.  You have NO IDEA how sincerely I am CRAVING SOME QUIET.  I’m going to find a way to make the coming week better, much better, than this has been.

And so here we are.  Because we’re traveling for Christmas, have another birthday to celebrate before we go and a wedding I’m helping with this weekend, I feel like my drop-dead day for Christmas, and even for the year, is Friday.  Many things have already been dropped from my list, but some I can’t bear to let go of yet.  Man oh man, I’ve got a lot to do!  I’m praying (quite earnestly) for children who aren’t in pain, aren’t interested in playing with powder, and who aren’t in the mood to fight.  Hmmm, I wonder what my chances are on that one.

And so here we go.  This week’s total:  101 steps recorded.  I’m not going to go back and count how many of them were cleaning up broken, stained or powder-covered things.  I’m pretty sure I’ll cry if I do.

1.  I’m not at all responsible for this, but my baby learned how to crawl down the stairs this week.  Hooray for her!  All too often she will follow the big kids upstairs only to have them all parade back down a few minutes later.  If no one notices she wants to come down, she simply finds things she can carry and starts dropping them from the upstairs landing down into the entry way.  The items get bigger and heavier until she gets someone’s attention.  Early in the week she found a piece of a revolver that Grandpa Harrison had engraved and given to my oldest, which she promptly dropped.  Oh, were we glad that no one was near when that one came down!  Both she and her Mommy are happy that she can now just follow the kids back down to join the party.  No more raining random items from upstairs!

2.  Somehow, in spite of moments like this, the house is relatively clean.  Because pretty much all I did this week was clean up random messes. 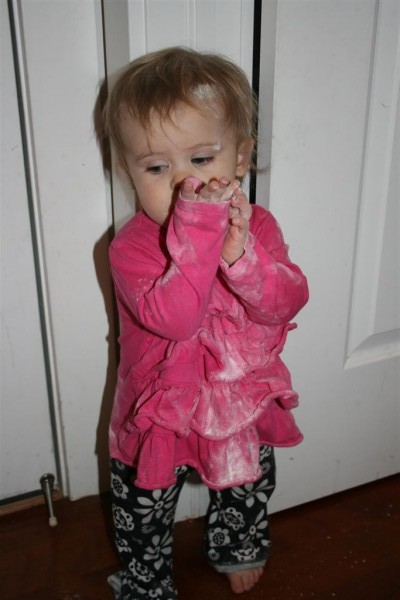 3.  I found some cool glass dishes at the thrift store.  I’m excited to use them, but I think I’d better quit going there, because I really don’t need any more dishes.  Even if they’re vintage, and beautiful, and super cheap.  Yep, I’d better quit.  But I did pick up another dictionary which will be put to good use.

4.  Thanks to the convenience of ebay, I was able to find a replacement Mary for this nativity.

5.  On Thursday I picked up a few hundred pounds of food and many boxes of #10 cans for a dry pack canning activity I was responsible for on Saturday morning (because December isn’t busy enough?!).  My space shuttle van was totally packed with stuff. 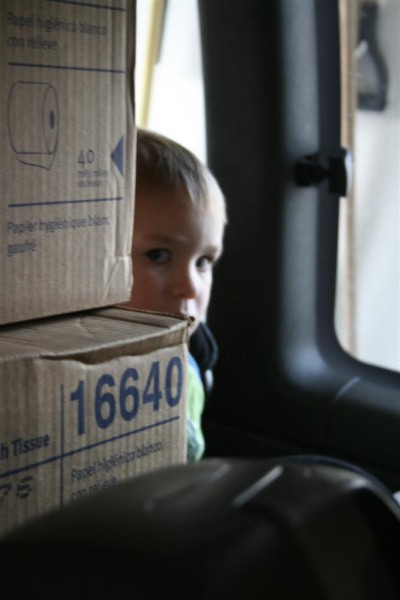 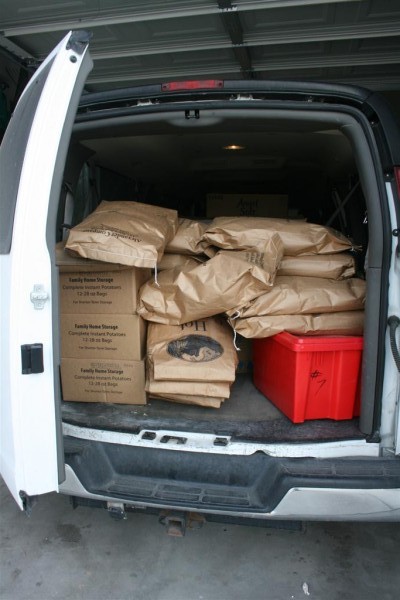 6.  I’ve been kind of a slacker in the breakfast department for a while, so this week I did a better job of cooking breakfasts that my family really like  (egg, ham & cheese on bagels being one of the school day favorites).

7.  This was a week when 90 percent of the things I did were addressed, not because I wanted to do them, but because it was my duty to do them.    I wanted to be working on other things, like Christmas preparations.  Because I felt so buried in daily life I battled discouragement a lot this week.  I cried a few times, and once I locked myself in my office so I wouldn’t light into a child I was pretty upset with.  But there were also many times when I blinked back the tears and went to work.  I didn’t get to anything that was important to me personally, but I kept my word and met my obligations.  At least I can feel good about that.

8.  Tonight I climbed in bed with my twelve year old (who was totally annoyed with me and not afraid to show it) and we talked. I helped her with some things and we ended up laughing really hard together.  It felt good.

And so the week is done.  I am grateful for my Heavenly Father who gave us the gift of his Son.  There might be hope for me yet, thanks to Him.

Have a great week!
Jennifer