We got a phone call Saturday afternoon from the Ski Patrol of a nearby ski resort. 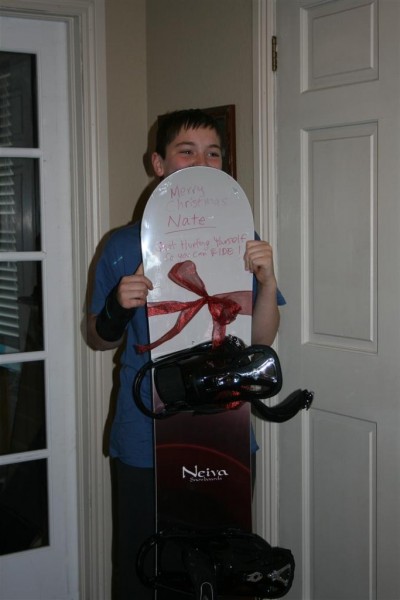 Our oldest son had gone snowboarding with two of his buddies for the day.   On the last run he caught an edge and wiped out,  hitting his head and knocking himself out momentarily.

His friends weren’t with him at the moment; they were waiting for him at the bottom.  It had been a great day, all of them working on cool tricks and techniques.

A couple of people noticed him laying face down in the snow.  They stopped to help, rousing him, asking him questions and determining that he was pretty scrambled (unable to remember his name, etc.).  They got him up and helped him down the mountain and to the Ski Patrol, who called us.

The diagnosis:  a concussion.

Worried as we were, I had to laugh.  Naturally.  Naturally he would do something like this.

He’s still wearing is wrist brace to protect the wrist he broke four days before Christmas.  It’s been nine months since his surgery.  You could say that he’s had quite a year, but it wouldn’t be true.  He’s always been like this.  More than 90% of our emergencies involve him.  I used to wonder when it would slow down or even end, but that was foolish.

He is who he is.  Rough water is what he swims in.   It’s just his style.  My job is to worry less, trust more, breathe instead of holding my breath.

We spent Saturday night waking him up periodically to ask questions, getting scrambled answers, looking at each other in the dark, wondering if it was sleep or the concussion, wondering if he needed further medical attention.  The body that looks so enormous to me lately didn’t look as big all curled up on the couch trying to make sense of the simple question, “What is your name?”

True to form, by Sunday night it was apparent that although he had a massive headache, he was himself.  No serious damage.  Once more, injury but not disaster.

And you move on to the next adventure.
Life is good.