celebrate their birthdays this month.

One carried the weight of the world on his shoulders, making up new rules to the “game” of war as he went along.  Spending years away from home and hearth, little time with his wife and step-children, he managed miraculous escapes and some brilliant attacks.  Out-generaled in many tactical situations, he in turn out-generaled his opponents for the hearts of his people.  At the end of the war, victory accomplished and the greatest military in the world at his feet, he did something no man had ever done before.  He stepped down, relinquished power and title, and went home, confirming what another George on the other side of the ocean had said of him, “If he does that, he will be the Greatest Man in the World.” 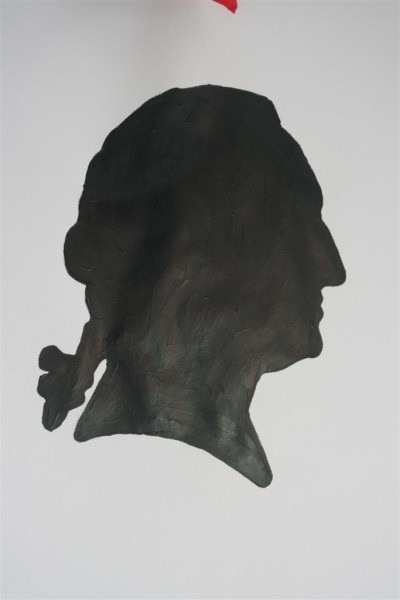 A short break and he was needed again.  First to oversee the Constitutional Convention, and soon after sworn in as the first President of the United States of America, George Washington once again left home to become the father of the greatest nation in modern history.

He chose, for the inscription on his tomb, not the titles we assign to him, but this simple testimony:

“I am the Resurrection and the Life; sayeth the Lord. He that believeth in Me, though he were dead yet shall he live. And whosoever liveth and believeth in Me shall never die.” 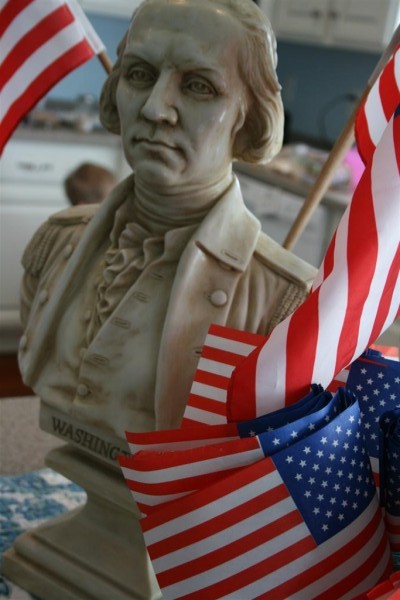 Then, years later, another great man entered the world stage.  Tall, awkward, keenly intelligent and perceptive.  Hungry for knowledge, well-read, witty and perhaps one of the best story tellers ever to live.  Abraham Lincoln also carried the weight of the world on his shoulders.  George Washington was one of his heroes.  Of Washington he said “On that name no eulogy is expected.  It cannot be.  To add brightness to the sun, or glory to the name of Washington, is alike impossible.  Let none attempt it.”

And yet Lincoln would become equally great, becoming the second most written about man who has lived, surpassed only by the carpenter from Galilee, Jesus Christ.

Many have concluded that Lincoln suffered from debilitating depression.  I disagree. He had a melancholy temperament, but I have never known a severely depressed individual who was capable of running daily life, let alone a nation at war with itself.  Aware of his temperament, he learned to tell stories that brought laughter and life both to himself and all around him.  He taught himself to treat sadness with humor and laughter.  He had the gift of empathy; he could understand how others felt and what they would think,  allowing him to anticipate behavior and actions and know in advance how to counter these events so they would work to his (and the nation’s) benefit.

He lost a son while living in the White House.  His wife lost two brothers, who fought for the Confederacy, in the war.  No stranger to heartache, loneliness and loss, Lincoln carried more of these difficult memories throughout his life than most of us will ever experience. 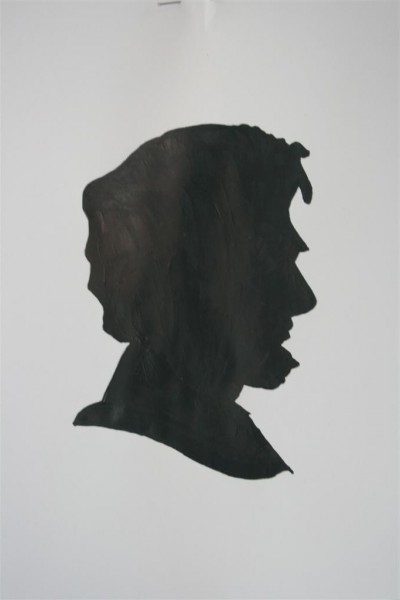 But he trusted God.  After the Battle of Gettysburg, Lincoln visited General Sickles in a Washington hospital.  Sickles had been wounded and was recovering from a leg amputation.  During the visit Sickles asked Washington if he had been anxious about the outcome of Gettysburg, to which Lincoln replied that he had not been anxious.  When pressed for an explanation, Lincoln said this:

“In the pinch of the campaign up there, when everybody seemed panic-stricken, and nobody could tell what was going to happen, oppressed by the gravity of our affairs, I went to my room one day, and I locked the door, and got down on my knees before Almighty God, and prayed to Him mightily for victory at Gettysburg.  I told Him that this was His war, and our cause His cause, but we couldn’t stand another Fredericksburg or Chancellorsville.  And I then and there made a solemn vow to Almighty God, that if He would stand by our boys at Gettysburg, I would stand by Him.  And He did stand by your boys, and I will stand by Him.  And after that (I don’t know how it was, and I can’t explain it), soon a sweet comfort crept into my soul that God Almighty had taken the whole business into his own hands and that things would go all right at Gettysburg.  And that is why I had no fears about you.”   (quoted in The Almost Chosen People, by William J. Wolf, p. 124-125)

Is it any wonder that the greatest speech of his career was given after this battle, after this personal experience with God? 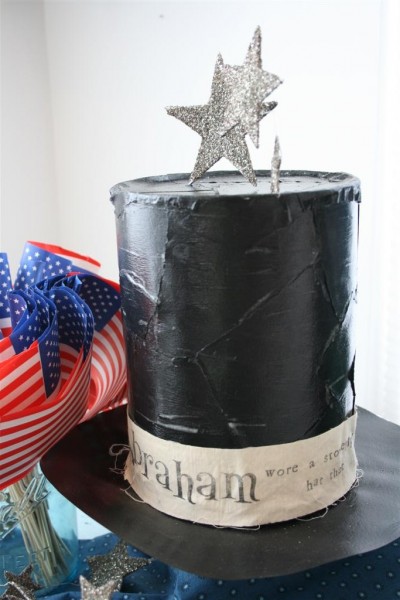 For me, President’s Day is both somber and festive.  We celebrate with simple meals like this, and talk about the great men we’re celebrating today.  My personal reading each February features a historical work about one of these men.  This morning, just for fun, I tried my hand at painting their silhouettes (seen above).  I’ve always wanted to try this but have never taken a deep breath and tried it.  I painted them in acrylic paint, and after they dried I pinned them to a ribbon which I hung in our kitchen.  This little project was a lot of fun; I’ll be trying it again soon! 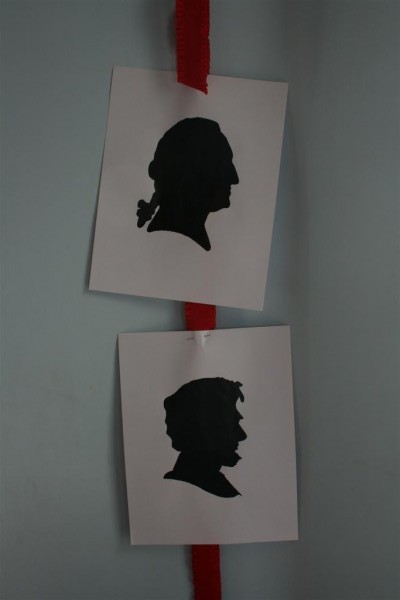 My little experiment spurred both discussion and a paint-fest in the kitchen, with six children creating colorful art of their own. 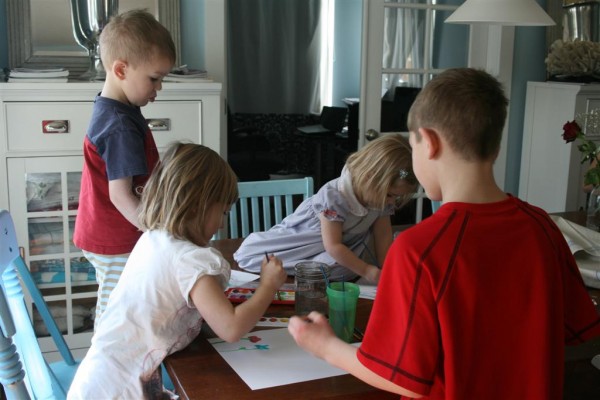 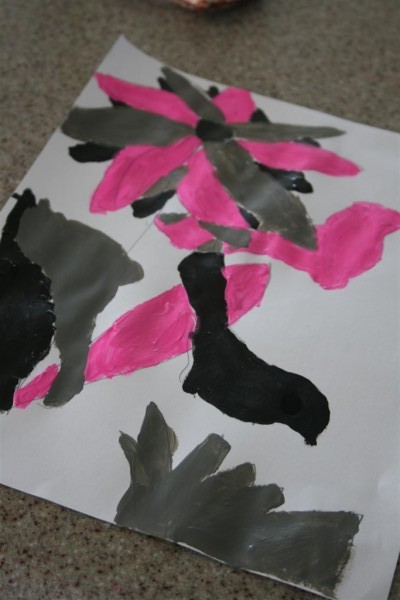 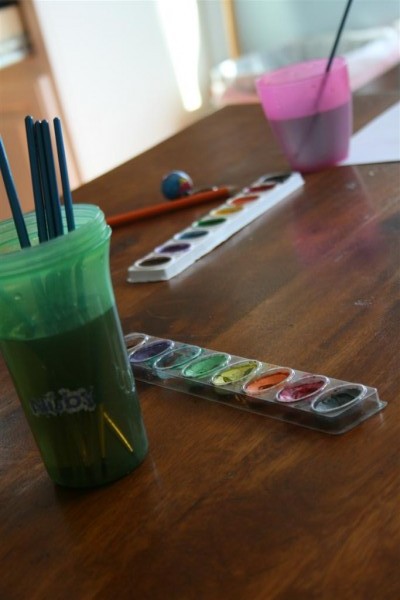 I am grateful that our country still has a day set aside to honor these great men, men who I love reading about, men who inspire me to be a better person.

Edwin Stanton said of Lincoln, “Now he belongs to the ages.”

They both do.  But they are remembered.
Happy Birthday to two great men.