It’s a fascinating thing to watch your children grow up.  I’m learning a lot about the teen-aged years from our fourteen year old son (who, I am sure, would say I’m not learning nearly enough or nearly fast enough) who at times surprises us with humor and confidence that make us shake our heads and laugh.

Yesterday was such a day.  He came downstairs for school looking like this: 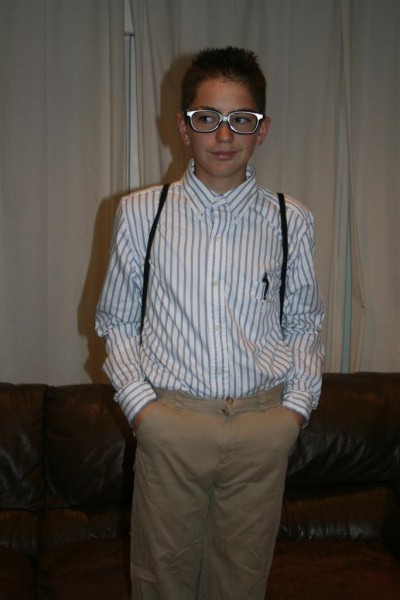 No, it’s not Halloween.  No, he doesn’t dress like this.  It was just Friday, but he and a half dozen or so friends all texted each other the night before and deemed it “Dress Like a Nerd Day.”

So they did.  He found thick black glasses and taped them up, ironed a button up shirt, donned thick white socks with his brown dress shoes and somehow squeezed into khaki pants that haven’t fit in about 18 months.  The pants were so short on him that a good two or three inches of white sock showed between the hem and the shoes.  Shirt tucked in tightly, the fit of the pants was almost painful to behold.  His hair looked like a brown q-tip.

He walked into the room and my husband, who had no idea it was coming, looked twice and then burst into laughter.   Our ten year old son walked downstairs a few minutes later and when he saw his brother he turned around and went back up, thinking we had a stranger in the house.

I wish these pictures were better, but 6:15 a.m. provides no natural light. 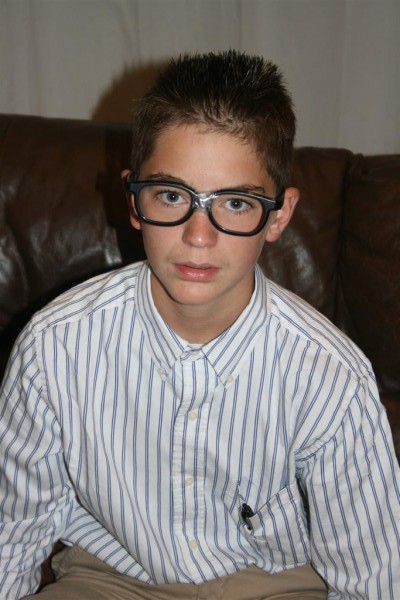 At the end of the day I went to pick he and his sister up from school.  My daughter made it to the car first and we watched for him to come.  Soon there was a tall person striding through the parking lot in a bouncy, studious walk that was NOTHING like his gait but which made me laugh out loud.    Apparently they had a great day, took some fun pictures (which they want in the yearbook), and had a bunch of kids tell them they wished they’d known so they could do it too.

In one of his classes his teacher made him explain in front of the class “what’s with the nerd suit.”  In a couple of other classes he caught his teachers staring at him throughout the class, trying to figure out exactly who he was.  Remember, it’s just the second week of school. 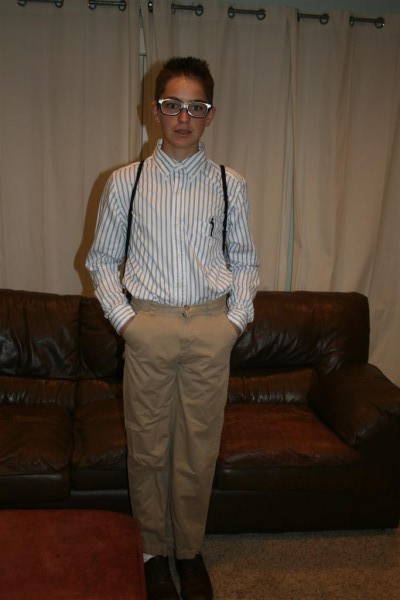 Oh my, it was funny.  Chalk one up for a small group of teenagers who managed to have a little harmless fun on an average day.  I love this guy.