I’m here to do some free advertising today, advertising based entirely upon the response I got at Saturday’s baby shower when I put a little bowl of cute pink speckled something on my kitchen counter. 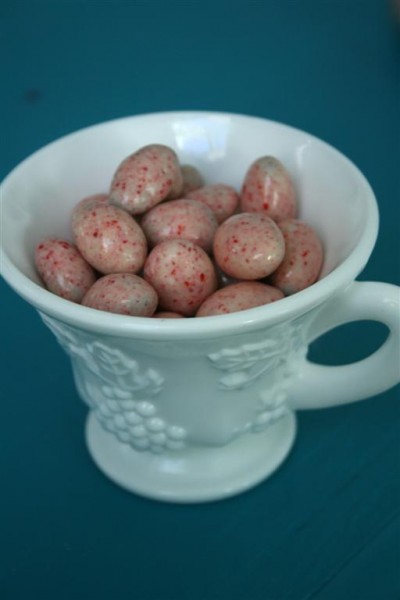 What are they?  Everyone wanted to know.  Candy cane almonds.  The package says, “Roasted Almonds in Dark & White Chocolate with Real Crushed Peppermint.”

I found them at Walmart on their big seasonal candy aisle.  I was walking down that aisle recently to purchase some Gatorade for my Gatorade-guzzling husband and these caught my eye.  They were expensive enough ($10 for 36 ounces, or just under $5/pound) that I passed them up, but when I was doing some last minute scrambling to pull together the shower I remembered them and splurged.

I know they say you’re only supposed to serve tried and true food to guests, but sometimes it’s nice to try something new when you have a lot of opinions to consult.  Plus, sharing with a large group guarantees that all you’ll do is taste them, which is what we’re all trying to do at this time of year, right? 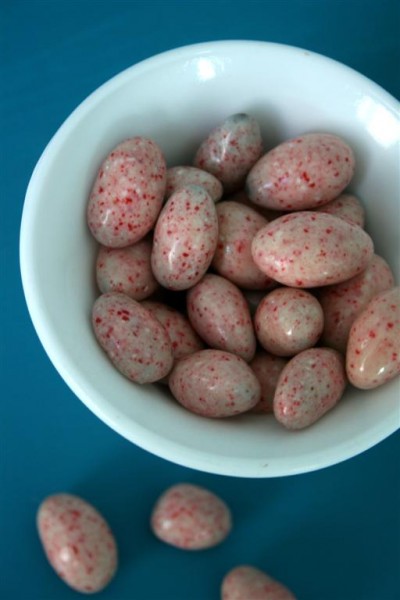 Here’s what happened.  A few people tasted them,  then told the person they were next to.   A couple of the ladies came back for second helpings of soup or vegetables, but I think all of them came back for more candy cane almonds.  When several of them came to get a hand full to stuff in their pocket before leaving I had to hide my smile.  The more it happened, the funnier it was.  People really liked them!

So I’m doing you a favor and telling you about these delicious little treats so that you can grab a container to have on hand for the holidays.  Maybe you’ll need it at an event you’re hosting.  Maybe you’ll have an unexpected group of hungry teenagers crash at your house for an evening.  Maybe you’re supposed to bring something to share to a Christmas party but you’re running ragged already and have no time to cook or bake.  Maybe you’d like to add something new to your Christmas goodie bags.  Whatever the reason, do yourself a favor and buy one.

This is what the container looks like.  They had eggnog flavor, too, but eggnog happens to kind of gross me out.  So I’ll let you try them if that’s one of your favorite flavors and let me know if they’re good, too. 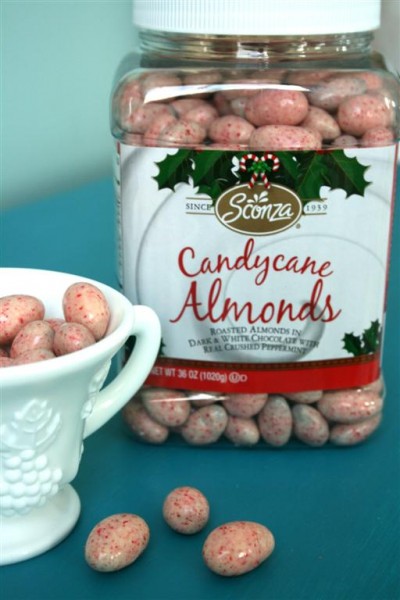 After the shower was over my sister and I went to the store and we each bought some to use during the holidays.  I’m having company for a week and I’m sure there will be a perfect night to get them out.