Someone at our house turned twelve today.   He wanted a birthday party with “a bunch of games with my friends.” 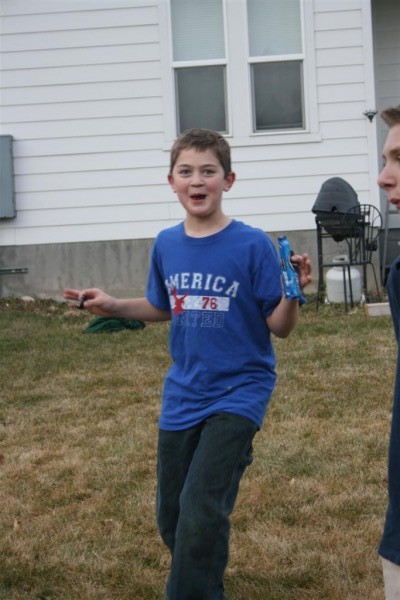 While I was happy to oblige him, I must also admit that I really stress about birthday parties and today was no different.  But even with the stress, I am earnestly trying to get better at parties, and especially at parties for older children and teenagers.

So, now that it’s over and the boys had a great time and my son is happy, I’m going to list the games we played for two reasons.  First, I’m sure I’ll lose my list of games and wish I’d written it down somewhere else next time I’m planning a party.  Second, I have a feeling that I’m not the first mom that’s felt intimidated by parties for the 12 and up crowd, and it might help someone.  Plus, I may need to encourage myself sometime by reading this! 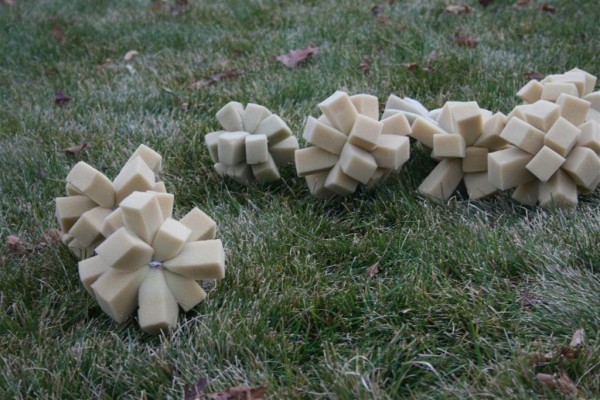 I made these foam balls more than ten years ago and we’re still using them.  They were a ton of work but obviously worth every minute.  I have a big box of them and while we waited for guests to arrive I put them out on the lawn and let the boys play with them.  I had a game planned with them, but usually find that every group of kids can come up with their own game using these balls in less than two minutes.  Today was no exception. 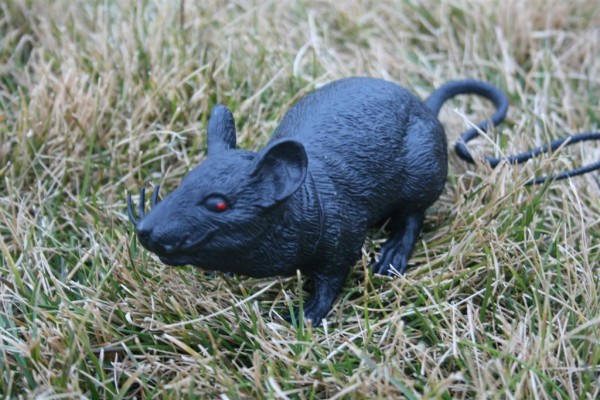 I bought this ugly plastic rat that squeaks when you squeeze it.  The idea for this game came from my friend who uses a rubber chicken when they play it.  To play, divide the group into two equal teams.  Then go through each team, giving each team member a number, starting at one.  If you have uneven players on each team, choose someone energetic to be two numbers so you have a player on each team that has been assigned each number.  I lined up each team on opposite sides of my lawn, placing cones to help them stay behind the line.  Here they are all ready to go: 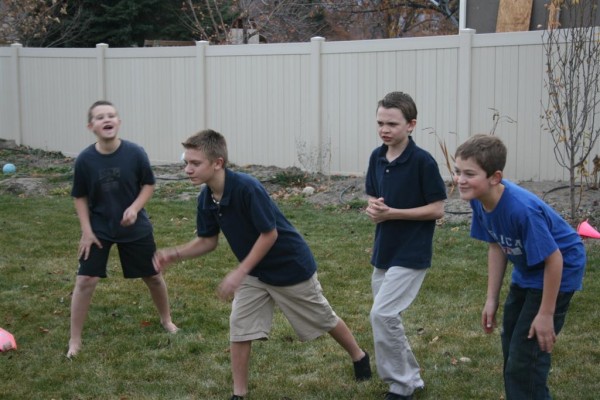 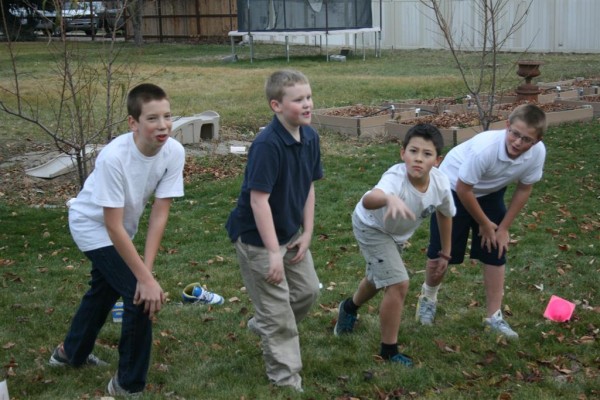 The rat was placed on the ground midway between the two teams.  To play, you call out one of the numbers you just assigned to the players.  You should have a one on both teams, a two on both teams, and so forth.  When you call their number, the player from each team races to the middle.  The objective is to grab the rat and carry it safely back to your team without being tagged by the other player. 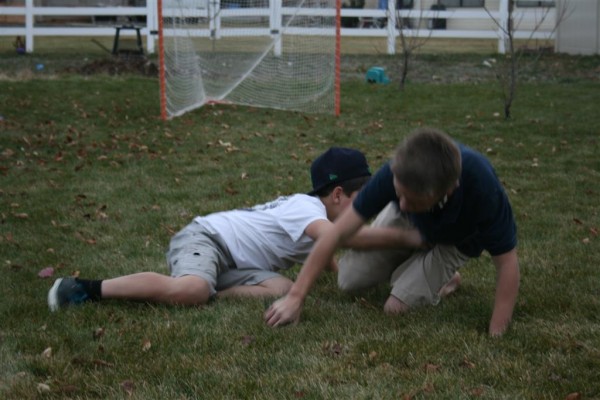 If you carry the rat back without being tagged your team gets a point.  If you get tagged, the rat goes back to the middle and the players return to their teams with no points awarded.  It’s so fun to catch them off guard, like when you call “four” twice in a row.  We call the numbers randomly to keep them on their toes.  This game is so much fun – it’s as much strategy as it is strength and speed.  We always laugh so hard when we play it as each pair of players begin to try tricking their opponents so they can get away with the rat.  I will also say that this game often becomes a contact sport as the kids really get into it.

After Snatch the Rat, we played a few relay races.  It’s always fun to see people with spoons sticking out of their mouths while they try to do things. 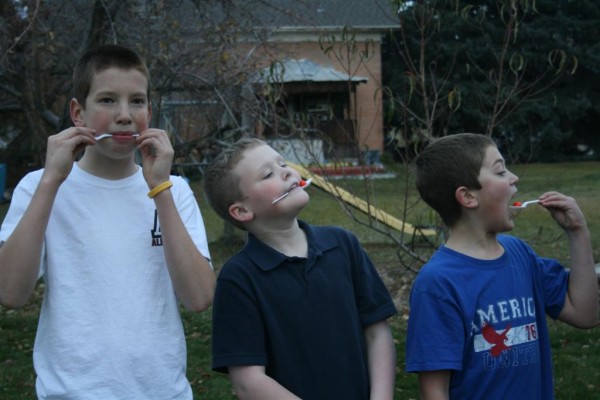 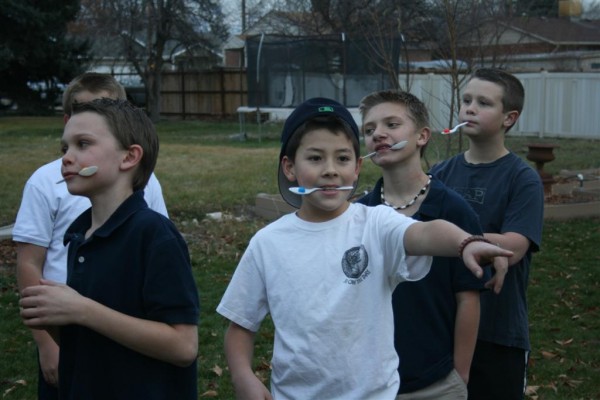 Another race we ran was the Three Musketeer Race.  Three players stand with their backs together in a triangle and they all link arms at the elbows.  Then they have to figure out how to run like this.  When you say “Go” they have to yell “All for one and one for all!” as they start the race. 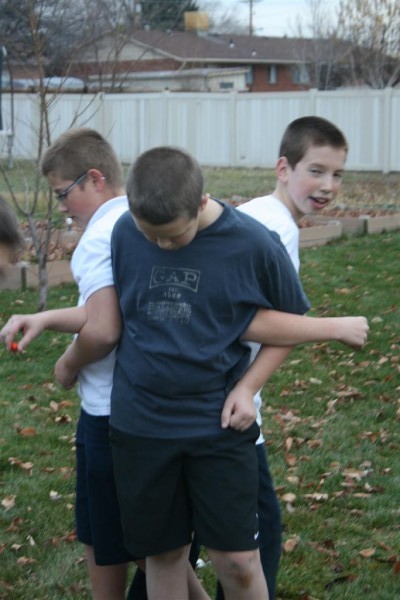 I did try to pair the boys according to size on this one so we would avoid injury.  It was so funny to watch them run.  This picture is blurry but you can see the smiles. 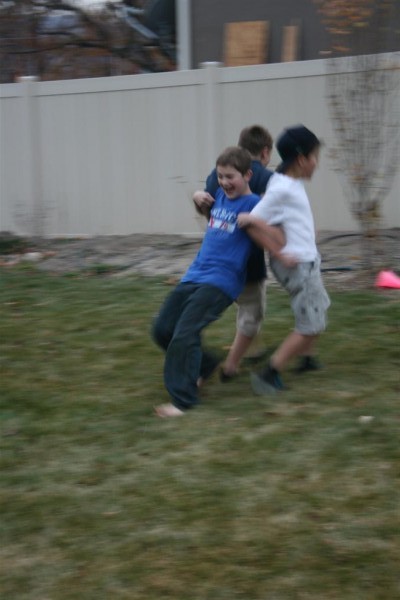 We also had a tug of war.  A couple of them.  I’d like to say here that I think it’s ok to play games where everyone doesn’t “win.”  Boys like contests.  They know what they’re good at and what they’re not good at.  Someone wins and they move on.  My opinion is that if each contest lasts no more than ten minutes, and if you switch the teams up for each new game, the boys do just fine.  We just kept moving at a fast clip and they had a great time! 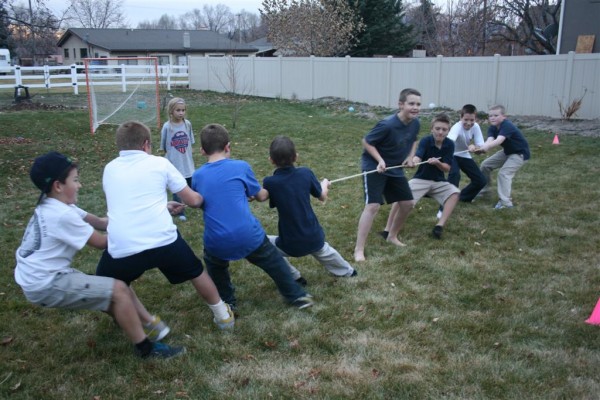 After the tug-of-war we went inside for some snacks:  caramel popcorn, chips and salsa and some drinks.  More games followed in the basement, where my camera battery died.

We hung donuts from a stick and had a donut eating contest.  I had three more games nearby but the boys wanted to play ping pong and air hockey.  They played doubles in both games and also used the double shot.  It was so much fun to see them all gathered around the air hockey table yelling and laughing together. 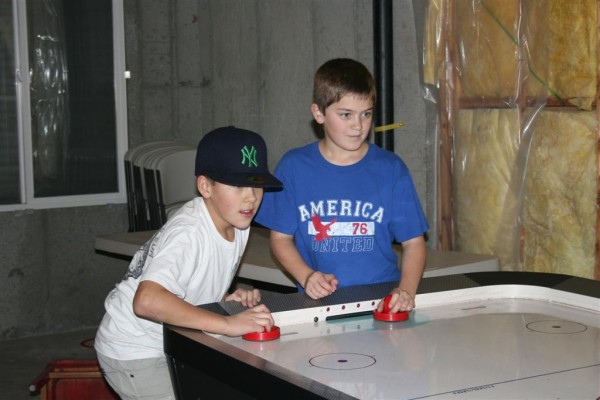 Some of these boys have gone to school together since kindergarten.  Here they are, in 6th grade, still friends and growing up so fast! 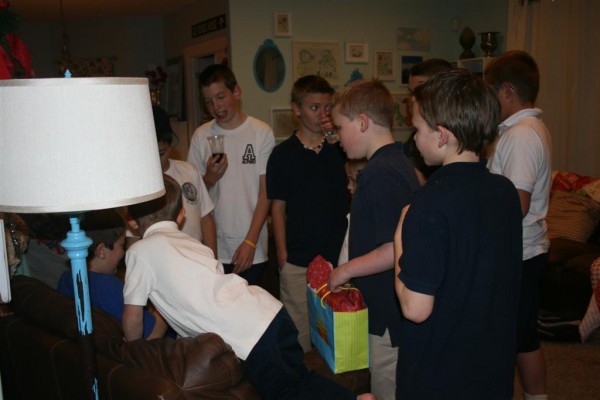 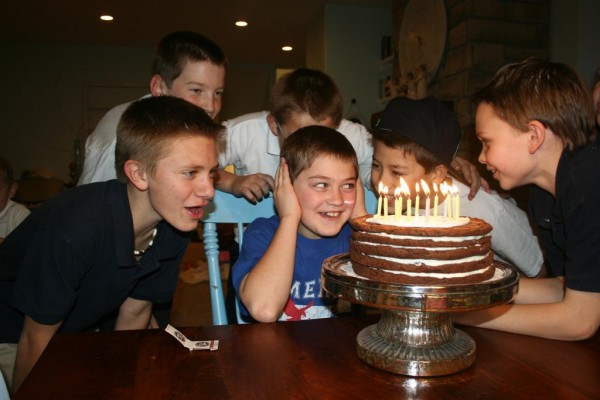 What mattered most to me was the happy grin on my boy’s face all day.  He loved every minute of it, throwing himself completely into every game and enjoying the feeling of being surrounded by friends.  I felt like the day was a success simply because he was happy.

A few things that went well:  It’s nice to have more games planned than you actually need.  Watching my six year old’s slack-jawed look of total admiration told me we’ll be using many of them again.  Also, one of my personal challenges with parties is the additional dimension of seven brothers and sisters hovering, wanting to watch or even hoping to be  part of the fun.  This can bring behavior challenges for me and a frustrated birthday boy/girl if they feel like they’re being smothered.  I feel like we found a nice balance today.  I gave lots of assignments to the other children so they were a part of it, had a reason to observe, but were busy enough with their job to let their brother feel like it really was his party.  I was also supremely grateful when my three year old, who wouldn’t sleep until 11:30 p.m. last night and was up at 6:30 a.m. fell asleep just before the party.  Her timely nap literally saved the day.

And so the day now draws to a close as our fine young man looks forward to his grandparents coming this weekend for exciting events in his life.  I’m so proud of him and am being reminded daily that he’s growing quickly.   He had a happy day and my heart is thrilled.

So now I’ll go sweep up the popcorn and get that wad of gum out of my carpet!  Small price to pay.  What a blessing it is to have children.