Earlier this year I finally read Angela Duckworth’s book Grit:  The Power of Passion and Perseverance.  I’d been meaning to read it for some time, and I’m so glad I did.  It’s a book I’m still thinking about eight months later.  My goal is to demonstrate grit in daily life.  I’m a better person for having read it.  If you learn one thing from this post, let it be this:  READ THIS BOOK! 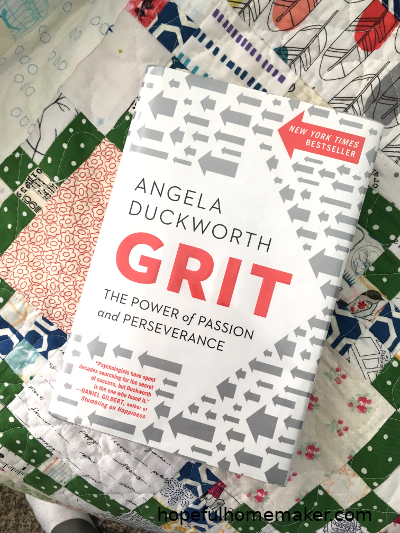 Angela defines grit as “passion and perseverance for long-term goals” and argues that grit is more important in predicting future success than talents or resources.  She’s got research and statistics to back her up and all of it was fascinating to me.  The power of grit helps us achieve our potential and we can grow our grit both from the inside out as well as from the outside in.

One of my favorite passages in the book says:

“We all face limits – not just in talent, but in opportunity.  But more often than we think, our limits are self-imposed.  We try, fail, and conclude we’ve bumped our heads against the ceiling of possibility.  Or maybe after taking just a few steps we change direction.  In either case, we never venture as far as we might have.

How to apply it?

I found myself asking questions like, in what areas of my life do I need more grit?  How can I have more grit as a mother?  What can I do to help my kids be grittier?  What does grit look like in everyday family life?  I’m still asking them, and working to make our family culture one that values and promotes grit.    We’ve always valued practice, hard work, and not quitting in our house.  Our values haven’t changed; I’ve just got a better vocabulary and vision.

It turns out the timing couldn’t have been better.  It’s been a year like no other for my family in both good and hard ways.  A focus on grit has really helped. 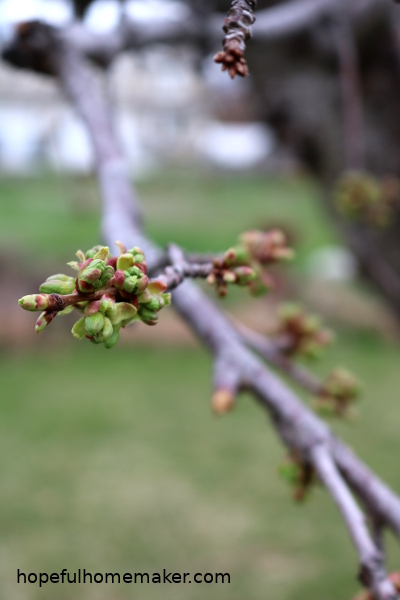 Some Things we are Practicing:

It takes grit to learn and teach grit, so we practice all the time.  When I mess up I remind myself that I can develop grit in “parenting with grit”.  Then I take a deep breath and try again.

Talk about grit in daily life

Eric and I decided to be more open with our kids about how we’re practicing grit in our own lives.  Our kids are getting older and we want them to recognize what we’re modeling as adults.

My husband spent four months interviewing at various companies for a new job.  The one he was most excited about started off with a timed test to work out a difficult algorithm.  He did not do well on the test, and never heard back from the company.

A few weeks later he crashed on his mountain bike and broke his shoulder blade (although they mis-read the x-ray and told him nothing was wrong).  This happened a couple of days before he was flying  to meet executives at another company he had interviewed with.  In pain and moving slower than he realized, he missed his flight!  Embarrassed but determined, he worked out another flight, made the trip a couple of hours later, joked about his mistake, and had a great experience.  When the job offers started coming, this company was first in line, and is the company he now works for.

At the beginning of the summer I sprained my ankle badly.  I injured myself on the same day that I had committed to provide 24 gallons of lavender lemonade for a wedding reception.  In spite of my pain I worked to keep my commitment that day (with the help of my son who carried most of it).  I iced my swollen, purple foot and did my best.  It is still swollen and painful 2.5 months later but my kids watched me work hard all summer for my most passionate cause:  our family.  Surely that is grit in daily life!

We spent a lot of time talking about these things, not glossing over the disappointment, pain, embarrassment or stress.  Eric and I didn’t handle our circumstances differently than usual; we just talked a lot more about how we felt and why we kept working. 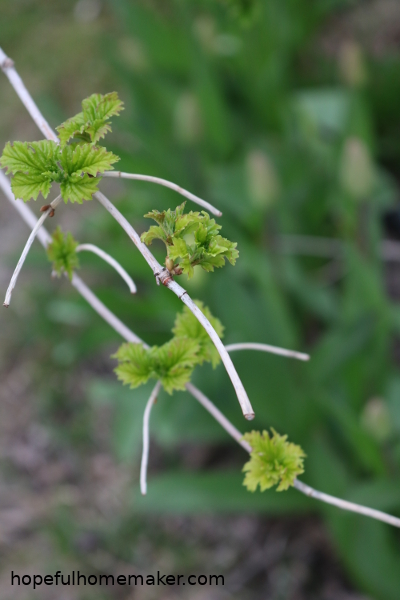 I have always worked to avoid comparing my children to others, or even to each other.  But I have, on occasion, made the mistake of comparing them to the anonymous “normal” – whatever that is.   In frustration I have said things like “why can’t we clean up after ourselves like normal people?” or any other version of comparing us to some unnamed family or group that does everything right.  It’s wrong. Nobody is normal.

Last night I sat next to my oldest son, who got more of this “why can’t you be more normal” junk than any of my kids.  I sat next to him as he expressed frustration with a principle he was struggling to work through in his mind.  I remembered learning that my family is one of a kind.  I tickled his back and told him that no one else, in the history of the world, has ever been just like him.

Now, every time I hear the word “normal” come up as a comparison I simply say, “Normal’s just a setting on the washer.”  We laugh, talk about what we would like to improve, and discuss ideas.  Then we focus on our efforts, on creating a setting that supports the goal, and showing grit by perservering in the goal. 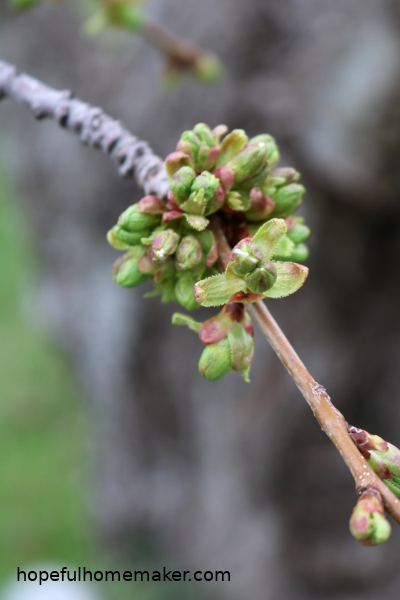 Give Permission to Fail

Mistakes are part of life.  We say that “mistakes are expected, respected, examined and corrected.”  Hard work brings both success and failure and the effort is worth noticing.   That effort is what matters.  If applied again, with more understanding, over and over, it will yield great results.  I want my kids to know how proud I am of them for showing grit.

Some of them have started new things.  Before they began I said, “I expect you to mess up and make a lot of mistakes at this.  I don’t expect you to win on your first try.  What I do expect is grit. I expect you to keep trying, to get up and move on, to keep track of your performance and compete against yourself to improve.  That’s all that matters to me.  Have grit and keep getting better.”  I try to reinforce it by asking questions that help them measure their effort by these standards.

Talking about grit and praising effort isn’t always easy, but is a habit worth cultivating.  It doesn’t get any easier with young adults and teenagers, as the failures become more public, have longer lasting consequences, and get more expensive. 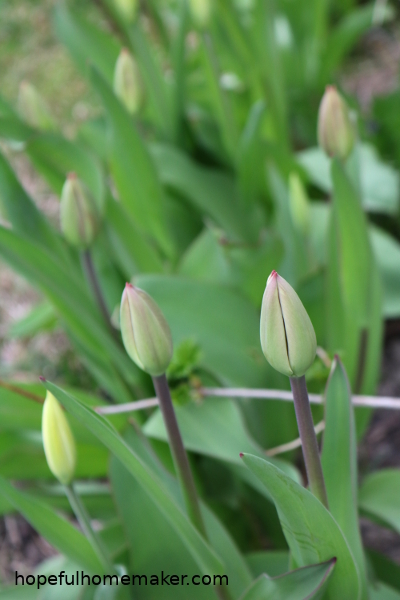 A tale of two daughters:

One Version of Grit:

Years ago my oldest daughter wanted to play high school soccer.  She played for a competitive club team part of the year, but got cut from the high school team her freshman year.  Disappointed but determined, she went back the next year.  Again, she was cut from the team.  This time it was heartbreaking.  Some girls on the team were terrible to her.

She persevered and went back a third time as a junior.  One day she said, “Mom, no one else is left.  I am the only one doing this, coming back a third time without ever having made the team.”  She made the team.  She had to battle hard her senior year for a spot on Varsity but she did it, and then she played a season of college soccer after high school.  That is grit.  And the grit she developed by believing in herself when no one else did has paid great dividends in her life.

Another Version of Grit:

I have another daughter who also plays soccer who has been gritty in a different way.  Her coach cut her from a soccer team she played with for ten years.  Sadly, it wasn’t about skill or athleticism, but a failing coach/player relationship.  It was brutal and she was devastated.  Everyone heard about it.  She lost friends instantly over it.

When the tears dried a little she sat down and was totally honest about her opportunities and how things might play out with both high school and club teams.  And then she listened to her heart.  What she heard in the storm was a faint pull toward a different sport that interested her, so she bravely pivoted and started training for cross country running.

On her second day her coach heard something he’d never heard from such a new runner, “What do I need to do to get better?”  In her first week she discovered a natural talent, good form, and endurance she didn’t know she had.  Last weekend I watched her line up on the starting line for her first real race and my eyes were misty with tears.  She ran, ran well and hard, and finished strong.  When I met her after the race I asked how she felt and she said, “Great! It was a good first race and I want to get better.”  That is grit.  And I can’t wait to see where it takes her. 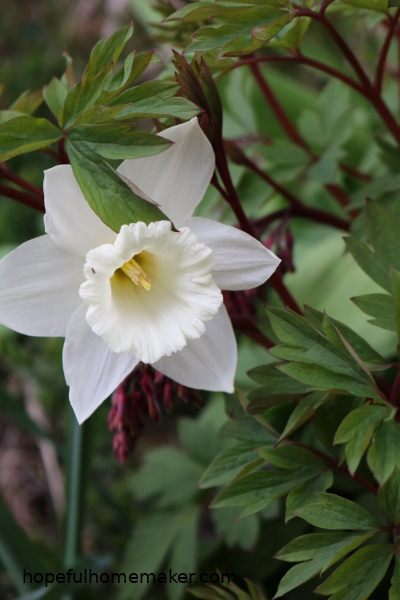 As I write this, my son asked me to do something for him.  I told him we need to do something else first, and he disagreed.  I feel strongly that we need to do it together so it’s something I’m praying about and working for.   My approach worked on Saturday, but today he walked away from me frustrated and refusing to participate.  I now have three children who are legally adults, and influencing them for good is a whole new world that really challenges me.  In a parenting stage I assumed would be relaxing I find instead that it takes ALL of me.  And I love it.  I love the challenge and am passionate about doing it well.  I guess that means I have grit, too.  I’ll do whatever it takes to figure this out.

That daughter who is now a runner?  She looked at me after a recent conversation about grit and observed, “You really like grit, don’t you?”  I grinned and said, “Yes.  Yes I do.”  We all should, because as Angela says in her book, “if you define genius as working toward excellence, ceaselessly, with every element of your being – then, in fact, my dad is a genius, and so am I,… and if you’re willing, so are you.”

Have you read Angela’s book?  How do you practice grit in daily life, and how are you nurturing it in your family?