For the last several weeks, my daughter has been on a mission to conquer the monkey bars.  With 5 soccer players, we’ve been at plenty of playgrounds in the last 8 weeks (when it wasn’t raining or snowing) and she’s been practicing at every one.  At last, she came running to me this week to announce that she did it.  Naturally, we had to have a little monkey bar show for Mom to celebrate the moment. 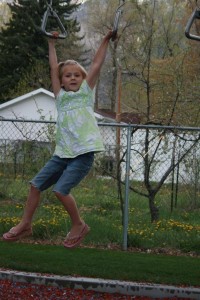 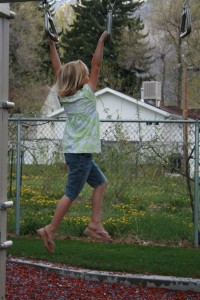 As I watched her display her new skill, I pondered for a moment the weeks of trying that built up to this.  I thought about how she refused to be discouraged every time she didn’t make it.  Instead of thinking about her failures, she continued to focus on how badly she wanted to do it.  And she believed she could conquer those monkey bars.  Little wonder that she was so triumphant when she reached her goal! 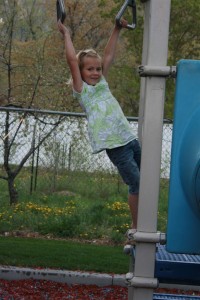 I wondered what kind of monkey bars I’m struggling with right now.  Some of my monkey bars are things I want desperately  to learn; others I would probably never seek.  But whether our monkey bars are chosen or thrust upon us by the realities of life, we are just like my daughter.  We can try hard things, work at them, and end up not just doing them, but having a great time.  Isn’t it wonderful to have children on earth with us, to remind us of the lessons of life in such simple ways?