Another birthday, another frozen dessert.  Hey, it’s summer and I’m pregnant.  I guess that baking cakes hasn’t been too high on my list.

This recipe is super quick and easy, but tastes great.  All you need are 24 ice cream sandwiches, a tub of cool whip (I know it’s not the real stuff, but consider how many fabulous no-bake treats call for it), nuts of your choice, and a jar of hot fudge sauce.  That’s it.  4 ingredients.  And about 10 minutes.  Doesn’t get much better than that. 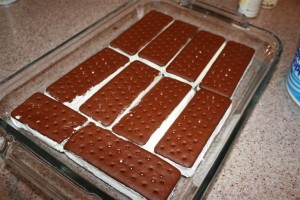 I usually have to cut one off a little bit for the last corner.  But that’s never been a problem because I usually have at least 7 volunteers clamoring to take care of the leftover piece.  I should say that I don’t usually use all 24 ice cream sandwiches, but my experience has been that they usually come in boxes of 12, so I buy 2 boxes and like I said, the leftovers get taken care of pretty quickly.
Next, warm up your hot fudge sauce just enough to make it spreadable and spread half of the jar over the ice cream sandwiches. 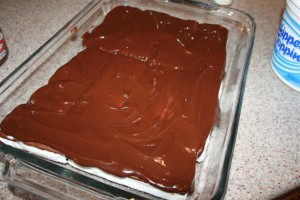 Sprinkle some nuts over the chocolate.  Usually we like peanuts, but this time I decided to try chopped almonds for fun.  They ended up being yummy, too.  One person who tried it actually thought it was toffee, which made me think that you could use toffee instead, and it would taste great. 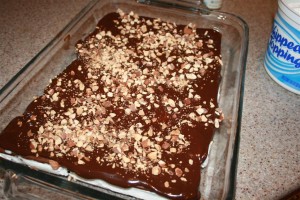 Now spread half of the Cool Whip over the chocolate and nuts. 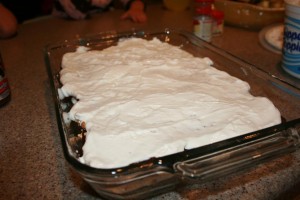 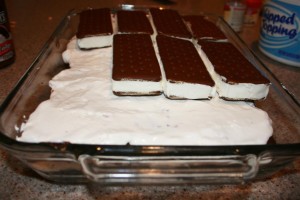 Then hot fudge sauce.  I love the way it all starts dripping down inside the edges of the pan. 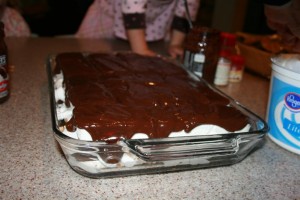 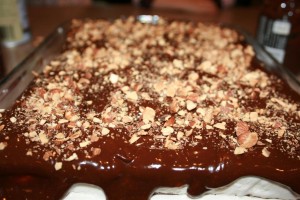 I should probably note here that my ten year old daughter grabbed the camera part way through the first layer and became the photographer for the remainder of the recipe.  And I must say, she did a pretty good job, especially considering that I didn’t bother to tell her what I was hoping for.

Back to the recipe.  Add one last layer of Cool Whip. 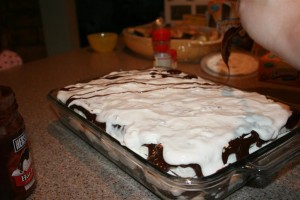 We decided to drizzle some chocolate across the top since it was Dad’s birthday and we love him. 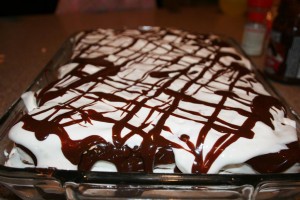 Place in the freezer for a couple of hours and then serve.
This is a ridiculously simple recipe that my family has enjoyed for years.  I love that it can be assembled in minutes, and it’s also a great recipe for kids to help with.  And in case you can’t tell, I’m a big fan of recipes that can be prepped ahead of time.  Every time I serve it, people love it. 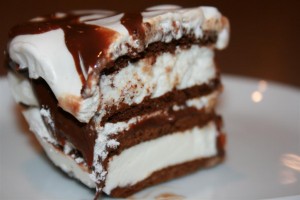 Do you blame them?