I walked in the door today from picking up my daughters and was greeted by a proud 18 month old who came running across the house shouting “Look!”

So I looked.  And this is what I saw. 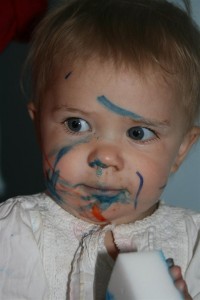 She was covered with ink.  Her hands were solid blue, she had marker all over her clothes.
The back of her neck was blue, and the inside of her ears were blue.  She was so proud of herself.
Her three year old brother, who was responsible for climbing to get the markers, had escaped with blue hands and a few marks on his face and neck.
The babysitting brother had no idea what had just happened on his watch (we’re learning).

So, I grabbed my camera and some Magic Erasers and we all went upstairs to assess the damage.
Let’s pause here to just make sure that every mother of toddlers knows about the existence of these fabulous things. 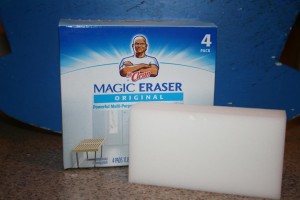 Every house needs a bunch of them on hand.  They can get almost anything off of a wall, without bringing the paint, too.  I’m a big fan.  In fact, I should have invested in stock years ago because of the small fortune I’ve spent on them.  You can get them in most stores on the cleaning aisle.  And if you don’t have them, please get some!  You’ll never regret it.

Back to my early evening detour.  At first I just saw things like this: 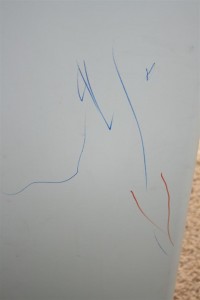 No big deal, I thought.  We can take care of this.

So I put the little ones to work in an attempt to teach them to take care of their own messes, and took a few pictures of them cleaning.  I was still feeling pretty good-natured at this point. 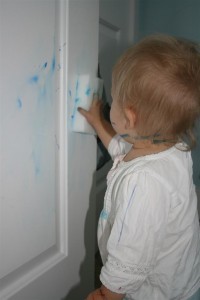 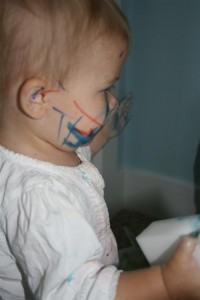 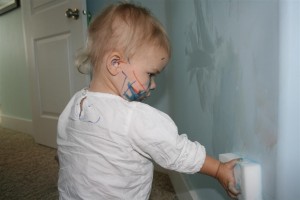 She was cleaning so earnestly!
The whole thing was almost a sweet experience until I walked back into the hall and could see the murals on her brother’s bedroom walls. 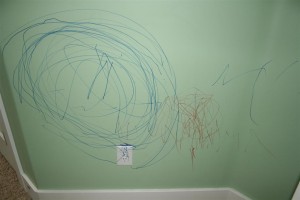 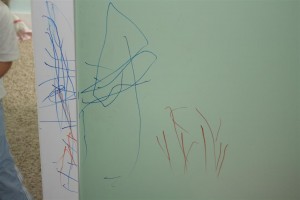 Then big sister walked in with her American Girl doll who had some new tattoos on her face.  They looked an awful lot like the graffiti on the walls.

I started walking from room to room, assesing the damage, and realized that the walls weren’t the only targets.  She had gone for the beds too.  Five, yes five, sets of white sheets all now had red and blue scribbling on them!  Three bedrooms, the hallway, and five beds.  I’d call that a pretty thorough adventure.

Then I turned around and discovered that my four year old, in a sincere attempt to be helpful, had taken everybody’s erasers and soaked them in the sink for a minute.  She didn’t wring them out.  Suddenly I had three little kids wiping blue and red marker off the walls as it ran down their arms and dripped bright blue ink into my carpet.

All of a sudden it wasn’t cute, funny or sweet, and I wasn’t feeling like a good, patient mom anymore.
That’s why the pictures stop right here.  I couldn’t bear it.
I reclaimed the sponges, explained the problem to my daughter, and tried to quickly get the blue out of the carpet.  I put the two little ones  in the bath and we scrubbed as much marker off their little heads and faces as we could.
I finished scrubbing the walls, a couple of which still have a blue tinge to them and which I will tackle with a fresh eraser on my own.  Then I answered a long distance call, raced to get my son to Scouts (late, by now) and came home to feed them all tacos for dinner.

We won’t talk about the lettuce on my kitchen floor.   Let’s just say we had an early bedtime.  And I’m going to bed early, too.