So Stupid of Me!

Have you ever had one of those days when your heart was hurting for a lot of reasons, some that you can define and some that you can’t, and then you agree to something and too late you realize it was the last thing in the world that you wanted?  And then the implications of what is happening REALLY hit you and you’re done for?

I did that today.  And all I can do is keep asking myself, “Why was I dumb enough to agree to this?”

At some point in time some people we know talked about how they shave their babies heads so that their hair grows in faster.  He thought it was a good idea.  So now that our baby has rubbed much of her baby hair off, he thought she needed a haircut.   In a way, he was right.  She had a long strip in the middle of her head that was still dark and longer and it was looking a little like a mo hawk.   But in the back it was still doing ok. 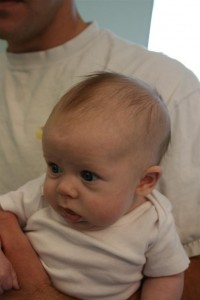 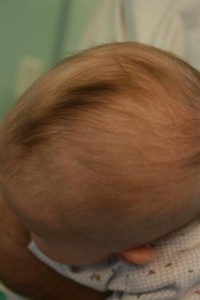 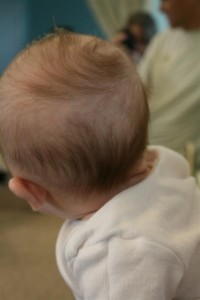 So, for some STUPID reason my brain was turned off and I agreed to let him give her a haircut.  Now, let’s just say that when I think of a haircut I think that implies that something is actually left ON the head.   I must honestly admit, however, that part of me felt like I was agreeing to somehow mar her beauty.  Like I was agreeing to rush her out of this perfect infant stage and into something different.  I don’t like feeling that way.  I should have known that those thoughts were my signal to grab the baby and run away from that ridiculous razor.  But I told myself that we were trimming the long mo hawk part and making her head look more like the sides.  I think of how guys get their hair cut and say things like “#2 on the sides, please” and I assumed that we were talking about something along those lines. 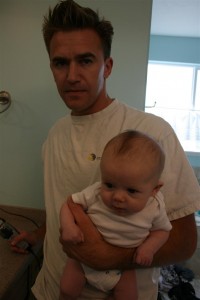 No.  I was wrong.  He was talking about removing every tiny bit of evidence that there ever WAS hair on her head.  Too bad he didn’t tell me that until after he’d done half of her head.  Actually, he never told me that at all.  I just figured it out as I snapped these pictures. 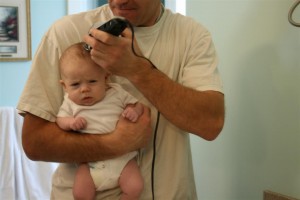 Poor thing.  Look how much she likes it….NOT! 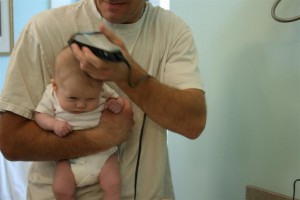 Right about here it hit me that he was going for the bald style, not a fuzzy style. 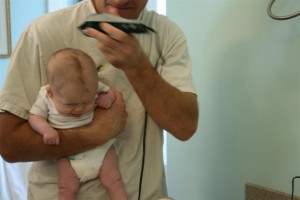 And this is when I had to leave the room. 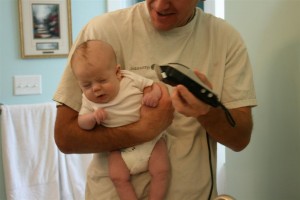 The only comparison that came to my mind was of Darth Vader when he has Luke take his mask off before he dies.  His head has always looked so awful to me.  And now my husband is turning my beautiful princess of a daughter into a freak.

I went around the corner where I couldn’t see it and sat down to process what was going on.  The razor kept buzzing.  Do I insist that he stops now?  How can I let him shave half of her head and not finish the job?  Will I be able to look at her?

I turned my head and saw this: 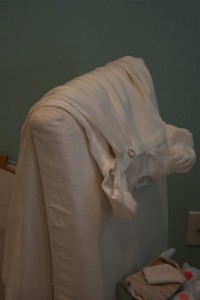 Her lovely silk gown, still lying where I left it, draped over a chair in my bedroom. 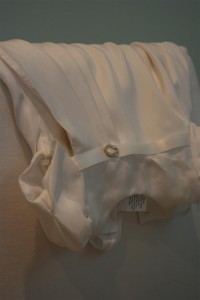 Things were so frenzied last week with everyone here that I never got a pretty picture of her in her dress.  I planned to put it back on her and do a real photo shoot.  (Please remember here that I’m trying very hard to do the things I’ll regret not doing if she turns out to be my last baby, so this photo shoot is kind of a big deal, if not in real life then in my heart.)  Now I can’t because she doesn’t even LOOK like herself!  That’s when I started crying.  And when the sentence “I can’t believe I agreed to let you do this” began parading through my mind over and over again.

The next thing that came to my mind was the story of my friend’s husband who cut their daughter’s hair when she wasn’t home and how she threw a block of cheese at him when she came home and saw it.  I figured if I was thinking about that story I’d better move farther away.

I went downstairs, shut myself in my office, and started ironing.  Ironing something beautiful.  Reminding myself that my daughter is beautiful if my husband’s haircuts aren’t.  Wondering how I can look at her without crying.  Knowing that it isn’t permanent, but it sure feels close to permanent.  Knowing how long my babies always take to grow their hair.

Thankfully, everyone had the good sense to just leave me alone.  Until about 45 minutes later when my husband was trying to get all the kids to help him clean the kitchen and my seven year old was holding the baby.  The baby got fussy, so naturally she brought her to me.  As my sweet young daughter handed off the crying infant to her crying mother, she simply said, “Her haircut looks pretty weird.”  Yup.  Leave it to the children to say it how it is.

I took a deep breath and looked at her, hoping to feel like she looks ok.  Wondering if I can bear to take a picture. Nope.  She doesn’t.  I can’t take the picture.  I can’t bear to catalog the evidence of this awful afternoon.  My daughter was right.  She looks pretty weird.  I carry her upstairs to find a headband she can wear to help.  It doesn’t help.  Finally I find a hat, my toddler’s hat that she wore the winter she turned one.  I tighten the ribbon and fold up the brim. 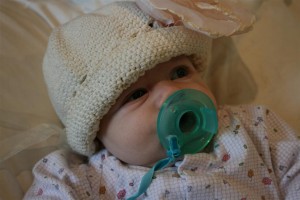 It’s not great, but at least she looks like a human again.

So, since I can do nothing about how terrible her head looks, I can at least state the following:

Number one.  Never let your husband near your baby’s head with a razor in his hand.  Never.  Under any conditions.

Number two.  Remember how much you love your husband even though he is never again allowed to suggest such a horrible thing as making your baby look like a dying Darth Vader.

Number three.  Until further notice, NO ONE is allowed to remove the baby’s hat, no matter what kind of good reason they might think they have.

Number five.  This little one is two months old TODAY!  I think I’ll end the post now and go cry a little more.  I’m so sorry, sweetling.  This never should have happened.  Next time I’ll listen to my heart.