I guess it’s been one of those weeks.  You know, the kind when although you can name at least three specific times when it was sunny, it still feels like it’s been gray all week.  So I’m giving myself permission to record 5 complaints and then I’m going to take a deep breath and move on (meaning, clean the house, or the kitchen at least).

1.  I’m not yet accustomed to what it means to have a bunch of almost teen-aged boys in my house.  I’m not used to the noise, the food, the mess.  I’ve got to figure this one out, but right now all it does is give me a headache.  Today when I offered some food to them to eat, I discovered later that they had just eaten the top layer off the ENTIRE pan!  Seriously?!  And then I thought of President Hinckley and how he said to just look the other way, so I did.  It’s still sitting there.  So are the dishes they left all over the place.

2.  I feel like I’ve been quilting my Rouenneries quilt…   FOR. EVER.  I decided to do a diamond quilt pattern on it, and it’s so full of flaws that I don’t know whether to cry at how imperfect it is, or to cry that it’s still not done. 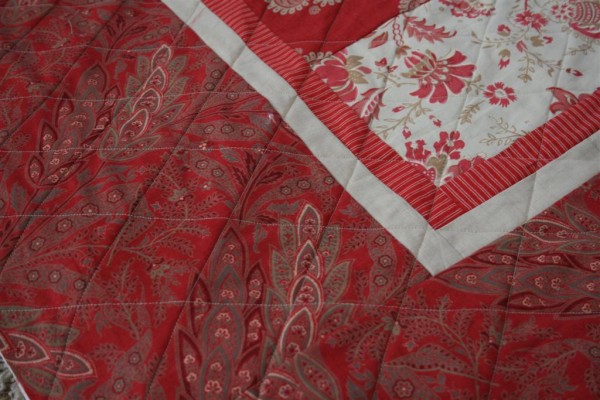 3.  I should remember that the days when I want most to enjoy a bit of quiet, or a small space of cleanliness and beauty, will be the days when it is loudest and messiest.  Especially when you’re potty training a cute little boy.  You never know what sorts of things will happen.  We’ll just say they’ve been happening.

4.  Much as you love your children, is it OK to have times when you’re just not sure you can handle being in the same building with them?  I have one particular child who screams more than the other 7 put together.   Sometimes screaming children are more frustrating than other times, even when I know that the variable that changed is my tolerance level, not the screaming level.  But if I do go deaf early, I’ll know whose lungs caused it.

5.  I’ve said this a million times before, but I’ll say it again.  I really, really, really look forward to having my Heavenly Father explain to me someday why my hormone levels had to be so closely connected to my emotions.  In particular, I’d like to know why my body is wired for postpartum blues that last much longer than normal.  Sometimes I feel like I really need to understand it NOW, but mostly I’m resigned to understanding it someday when it probably won’t seem so important to me.  For now, though, I’m a little tired of days when you know that nothing out of the ordinary is wrong, yet you feel like crying or hiding or running away or some combination of the three.