While we were in Colorado we camped for one night in a beautiful spot where I remember playing as a girl.  Homes have since been built closer to it but it’s retained its beauty. 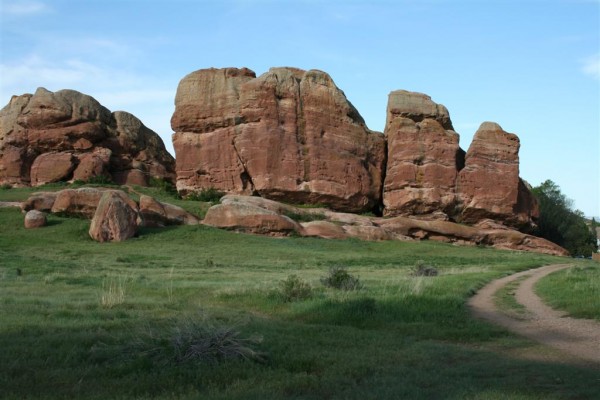 I climbed on these rocks as a girl, and had my share of frightened moments when the bats came flying out of their cave.  My husband climbed one of them with our 9 year old son. 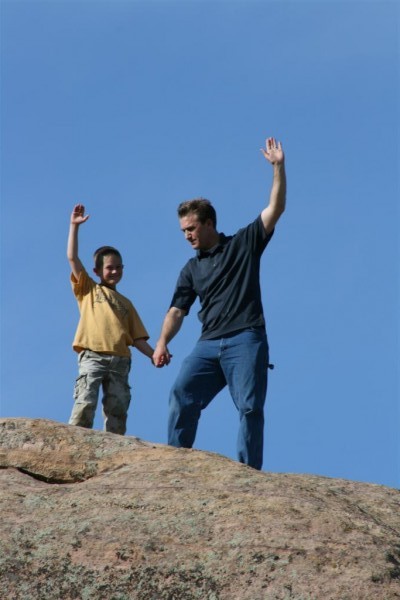 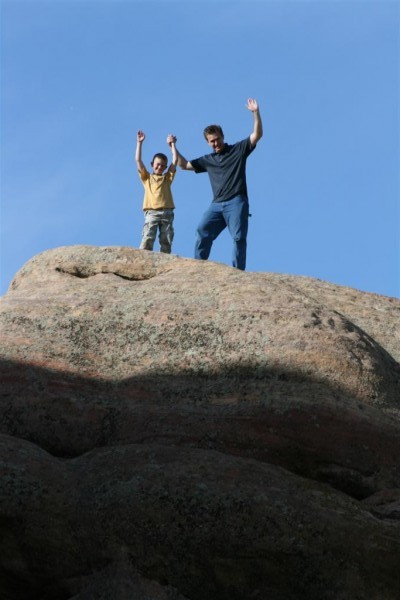 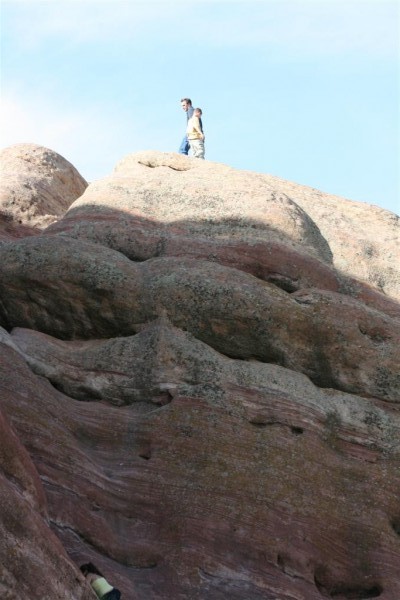 I grew up in such a beautiful area.  Sometimes I’m surprised by it a little when I go back. 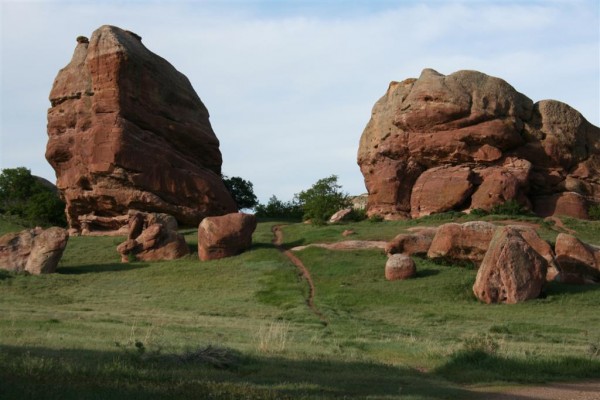 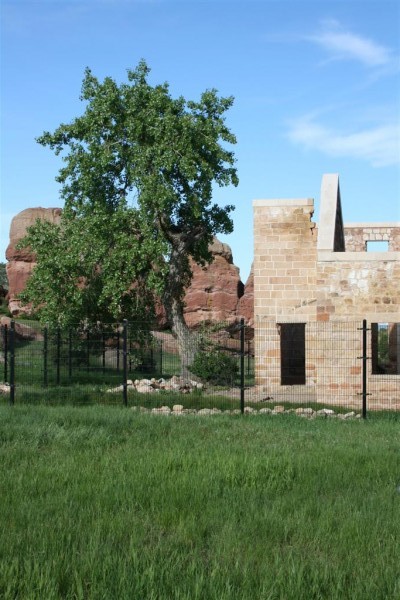 The campsite is directly behind an old stagecoach station.  Years ago we could walk around inside it, before it was fenced in.  It’s a very picturesque spot. 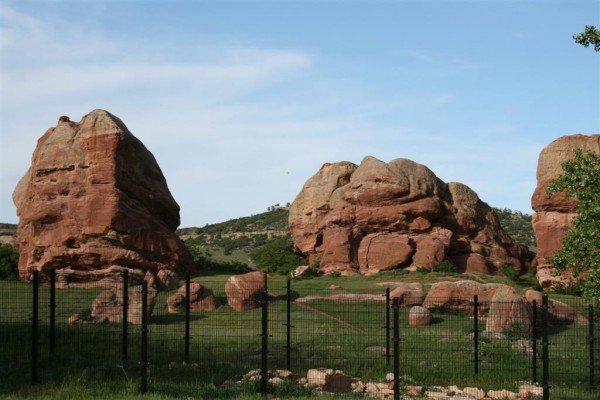 There’s a little stream running along the other side of the campground where some kids found a large dinosaur bone last summer.  We had fun playing red light, green light and other games with cousins, aunts and uncles. 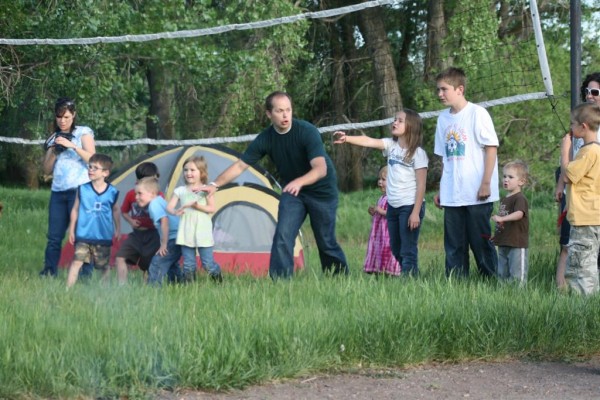 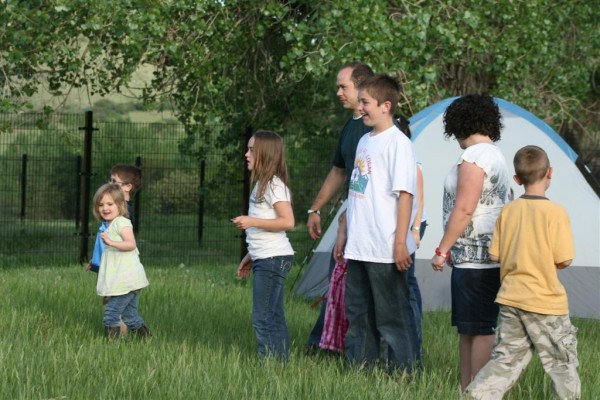 We roasted marshmallows and made s’mores. 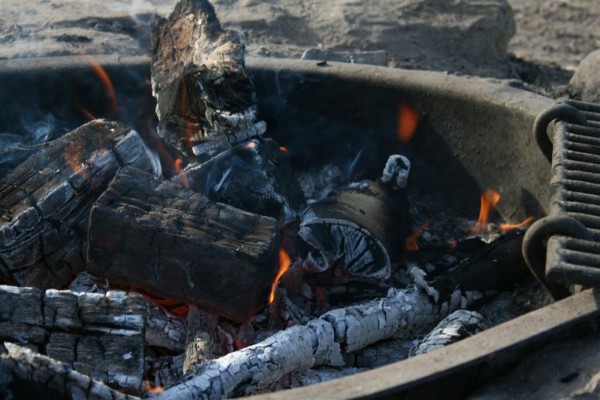 And then we stayed the night.

Which is kind of funny, because somehow as we were packing and driving up there, I honestly didn’t really believe that anyone was going to really camp.  I don’t have a problem with camping, but I don’t love it either.  I tell myself I’ll like it more when my children are all old enough to walk around and sort of take care of themselves.  I might be lying to myself.  Only time will tell.  When we got there, 4 tents had been set up.  Still, I somehow thought that most of us were going home to sleep.  If I’d taken them seriously I might have grabbed a pillow or a jacket.  I might have found a pair of socks to wear.  I don’t know why, I guess I knew they were in earnest, but I was so tired and so unprepared for doing it that I just didn’t think it would actually happen.  Well, it did.

There’s nothing like spending the night on the hard ground, wrapped in a quilt with your baby and no pillow to lay on while you get kicked in the head by your two year old.  The four year old on the other side of me kept yelling in his sleep, and my ear was about 6 inches from his mouth.  The seven year old who was sharing a sleeping bag with the two year old somehow rotated away from the toddler at a 90 degree angle, leaving my two year old sleeping on the tent floor with absolutely nothing.  So I found a way to share my blanket with her, too.

It might have been ok if I’d been able to sleep, but that never really happened.  First I listened to elk bugling for a while.  Then there were three gunshots in the night, followed by the sounds of people partying and chanting as if they were part of some aboriginal tribe.  The sound of the breeze in the trees and long grass provided something to listen to when the action died down, until all of a sudden every dog within a mile started howling at the same time.  Coyotes perhaps?  They’ve had a lot of them out there.  I just laid there all night, listening, trying not to move so I wouldn’t wake anybody up.  Every 45 minutes or so I would whisper to my husband to see if he was awake.  Most of the time, he was.  I wondered how wise it was that we were both spending a sleepless night in a tent before driving 8 hours to get home the next day.  I watched the same star rise, crest and pass over the top of our tent, using it as my evidence of the passage of time.  And then came the best sound of all.  Birds singing.  It must have been 4 a.m. when they started, and it was still completely dark.  When I heard it, I felt like standing up and doing a dance.  I’ve never been so grateful for the singing of birds, for it meant that morning would come.  I wanted to wake everyone up, tell them that it was morning, pack up and leave.  Instead I held still, listening to birds that sing when the dawn is still dark, pondering the wonder of a new day.  Finally, as the sky was getting a bit lighter, I slept for a little while.  Then I woke the baby, fed her, and let her crawl all over everyone else to wake them up.

And then it was over.  We got up, ate breakfast, packed up and went home for a shower and more packing.  We hugged and said goodbye and then headed back to Utah.  For some reason, the goodbyes were harder this time, because my brother was headed to Mississippi and we’re going to miss him.  He’s been around so much for so many years, I can’t really believe that he’s moving.  I’m grateful we all got to spend a busy weekend together making more memories to warm ourselves by while he’s far away.  And I guess I’ve learned my lesson.  The next time my parents say we’re camping, I’ll believe them and pack a little better.