Yesterday I wrote about the English lavender I recently planted in my yard.   I also planted some Spanish lavender.

The Latin name for Spanish lavender is Lavandula stoechas.   In my opinion the most distinguishing characteristic of L. stoechas is the showy “flower” which forms at the tip of the flower head (see below picture).  In fact, that bright purple decoration isn’t a flower at all; it’s a type of leaf formation called a bract.  Gorgeous. 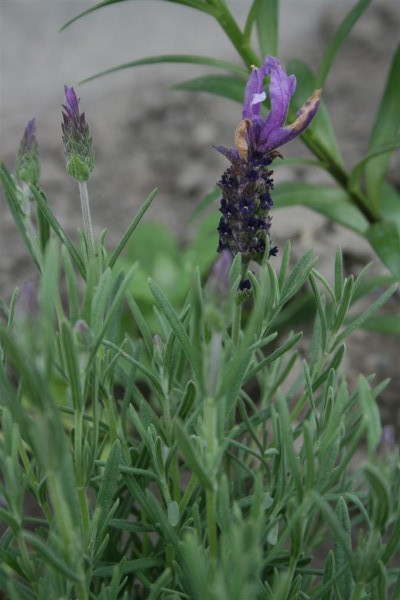 Spanish lavender’s aren’t as hardy as English lavenders.  While most L. angustifolia is hardy to -20 degrees Farenheit, L. stoechas is hardy only to 15 or 10 degrees.  It was, perhaps, a gamble to put some in my garden, but I decided it’s worth a try.

The plant I bought was labeled Lavendula stoechas ‘Madrid Purple’.   What I’ve read indicates that the bract is all show and no flavor and that it is also difficult to get much fragrance from the flower heads.  On this particular cultivar the individual corollas seem too small to be of much use.  It would probably be beautiful, however, in a flower arrangement, and my reading also indicates that the foliage, when cooked or grilled, stands up well as an herb in culinary dishes.  Spanish lavender, however, is not a flower of choice for sweet desserts.

In addition to the beautiful bracts, I was attracted to the Spanish lavender because the scent of the foliage seemed stronger to me than the English lavender I’m familiar with.  Again, my reading so far has indicated that the aroma of the L. stoechas foliage is, indeed, more robust.  Apparently it yields more essential oil per acre harvested than L. angustifolia, (English lavender). 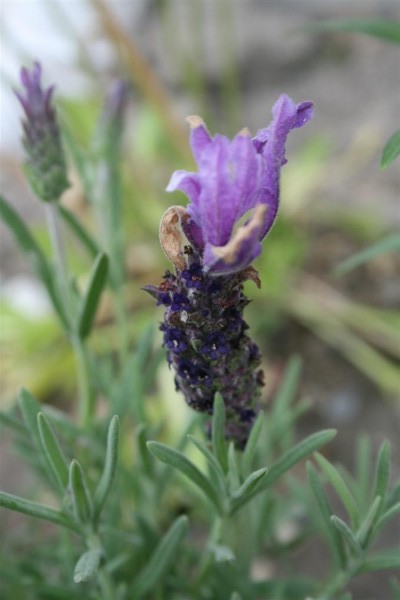 I purchased a second Spanish lavender plant, also labeled Lavendula stoechas ‘Madrid Purple’ which has white bracts instead of purple bracts.  The flowers on this plant also seem a bit brighter than the midnight purple color of the flowers above.  I’m wondering if this lavender with white bracts is actually a different cultivar.  In The Lavender Garden: Beautiful Varieties to Grow and Gather

Robert Kourik mentions L. stoechas ‘Alba’, a Spanish lavender with pure white bracts.  This beautiful lavender will, I hope, thrive in my garden  for several years to come. 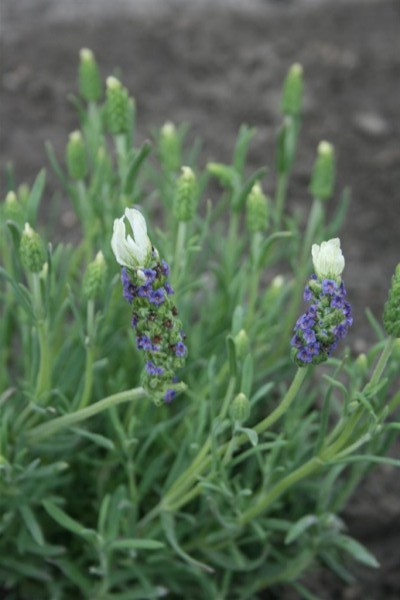 And so, in my little corner of the world I now have three slightly different lavenders growing.  While I’m pretty sure L. angustifolia will be my final choice for serious growing, the Spanish lavender is a beautiful plant.    It will be fun to observe these plants as summer arrives. 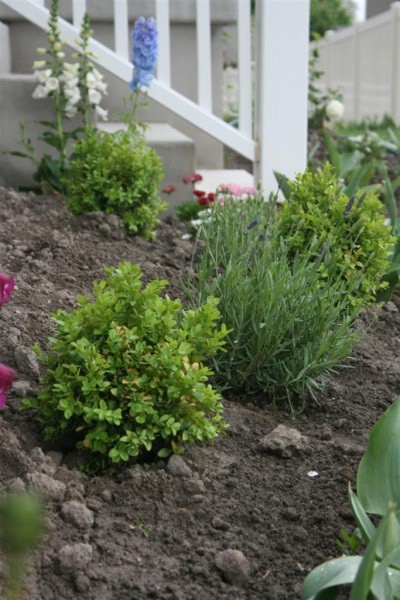