A year or two ago I saw the MmmCrafts Twelve Days of Christmas felt ornament series for the first time and was smitten.  The colors!  And detail!  I’m drawn lately to work with felt in my sewing, and these patterns are a great way to do it.  The first in the series are the Partridge and Pear felt ornaments. 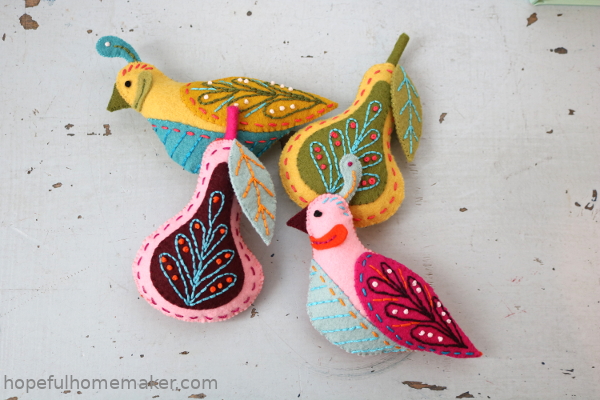 I purchased the felt pack for all twelve ornaments from Benzie Designs on Etsy.  The patterns themselves I purchased from MmmCrafts in her Etsy shop.  I was nervous about the embroidery, but the patterns have you use a great product that sticks to the felt so you can embroider right on it, then soaks off in water.  So cool! 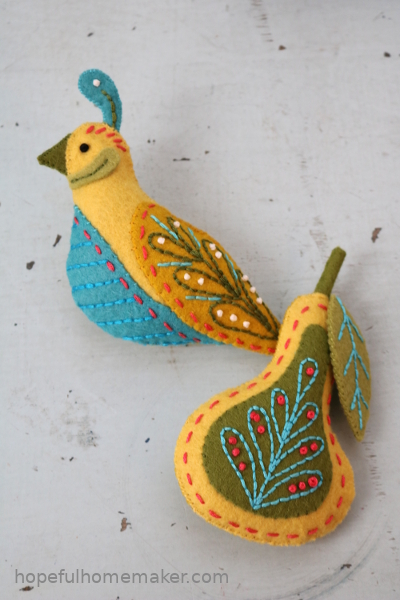 I actually started my yellow set back in February, but had a mishap with my felt.  The patterns call for a product from Sulky called Sticky Fabri-Solvy.  I ordered some from Amazon when I couldn’t find any locally.  Then I stitched away and soaked my felt to remove the adhesive paper… and it didn’t dissolve. Instead it was sticky with white clumps and smelled strongly of glue.

This was frustrating, but led to the best customer service experience I’ve had in a long time. I found a phone number and called Sulky headquarters.  Imagine my surprise when someone answered the phone!  She explained that the manufacturer had switched glue products without consulting them.  They have repackaged the product with the correct glue as this Stick’n Stitch you see pictured below.  If you order the Fabri-Solvy directly from Sulky, it is also the correct glue.  But there is still some of the bad stuff out there, and she said they often have problems from sellers on Amazon.  It was very informative.  She asked for my address and mailed me a new package of Stick’n Stitch! I was so impressed. 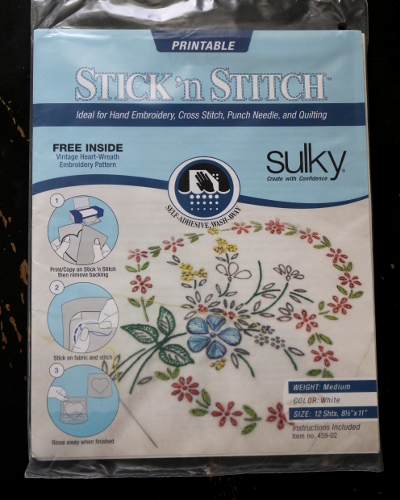 SO, if you ever need Sulky Fabri-Solvy, just pick up a package of Stick’n Stitch.  It’s the same product but sure to work properly. 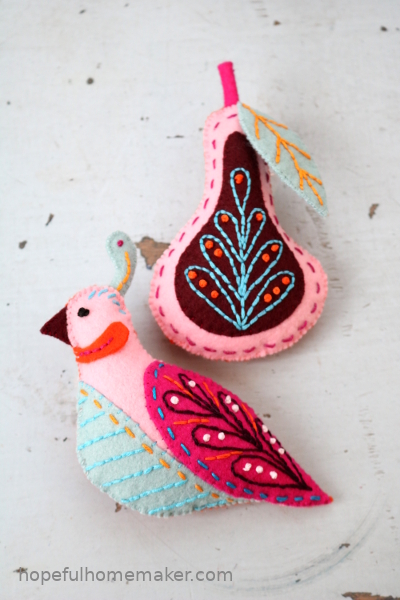 A couple of weeks ago I opened my box of felt and began again.  I remade the yellow set of ornaments and decided to make the pink version as well.

I now have these four adorable partridge and pear felt ornaments.  My goal is to finish the entire set before Christmas so I’m adding “2019” to the back of each ornament.  I hope it helps me reach my goal!