I have a sweet little book titled “And then in a twinkling”.  It’s a little holiday picture book that depicts the way one day it’s Halloween, and the next it’s Christmas, and how it all happens “in a twinkling”.  I’m tempted to say of this project,  “and then, in a twinkling, one lone star block became four”.  But that wouldn’t really be the truth about this Katie Jump Rope lone star quilt. 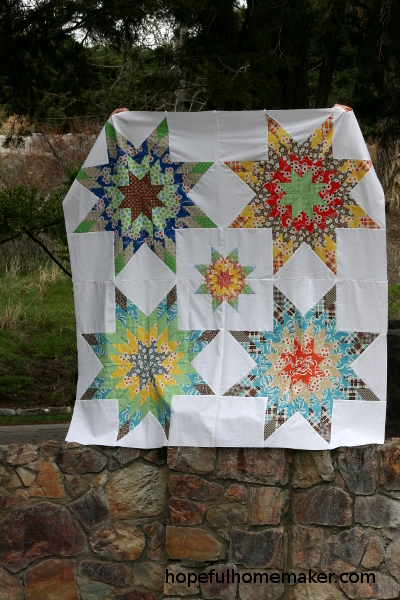 You see, I shared my original block more than a year ago, and in the last couple of months have made a few more blocks.  Nothing “twinkling” about taking a year to bring a quilt top to the next step, right?  Yet the last year definitely passed “in a twinkling”.  Why does time fly like it does?  Sometimes it amazes me.  When I finished the first block, my daughter was still in high school.  Now, a year later, she’s in Paraguay.  The months between included a car accident, concussion (which nearly ruined her graduation), leaving home, a semester of college, playing a season on a college soccer team, preparing to leave the country for 18 months, the holidays, 6 weeks in Mexico and now she’s been in Paraguay for 3 months.  What a year it’s been, and that’s without mentioning all that happened for the other nine members of our family. 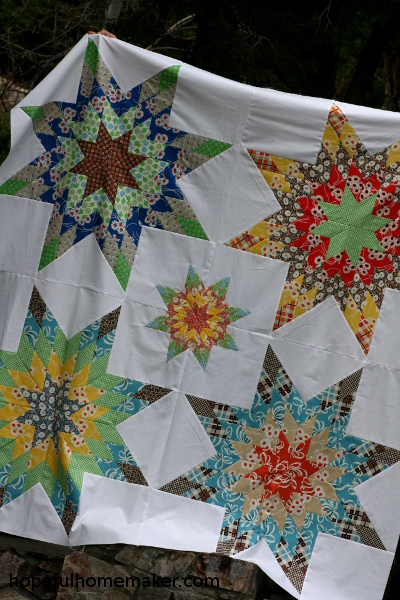 Sometimes I am hard on myself when life isn’t like a full-speed-ahead straight road with me methodically ticking everything off the list, completed and beautiful. (And doesn’t our media-filled world make it look like everything happens “in a twinkling” for everyone else?)  I wonder if that’s really the goal.  Could life be more of an excursion that includes circling back around, re-examining, picking up where we left off and adding something new? 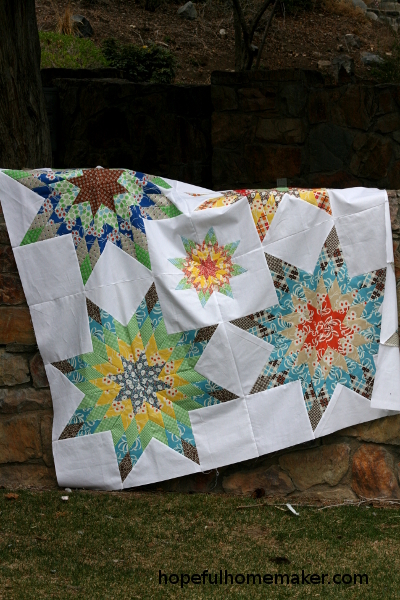 I am liking these fun, large blocks.  The four large stars are each 34 inches square, making the top 68 inches square at this point.  The smaller star in the center is made from the few small pieces I have of the original Katie Jump Rope collection.  I was happy to find a way to include them in the quilt.  I appliqued that star into the center after sewing the large stars together by glue basting the block to the quilt.  If I were to do it again, I would thread baste the block and needle turn the edges, even with the seams.  I think it would have looked better and been more accurate that way.  Live and learn, right?  Circling back around…. 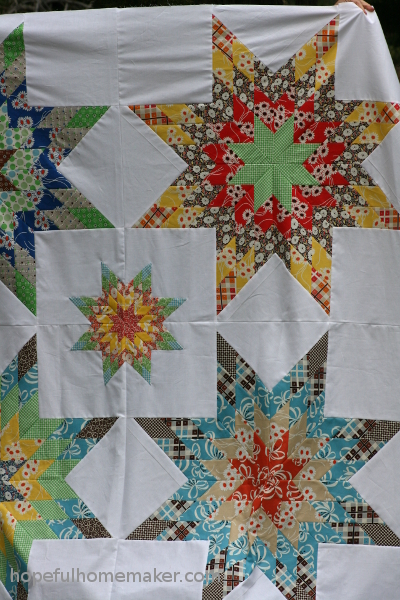 I am pausing again on this project to decide if it’s done, or if I should explore an idea for a border.  The idea has been lurking in the back of my mind for a long time.  Perhaps “in a twinkling” (translation: after many hours of sewing) I’ll have more to share with this Katie Jump Rope lone star quilt. 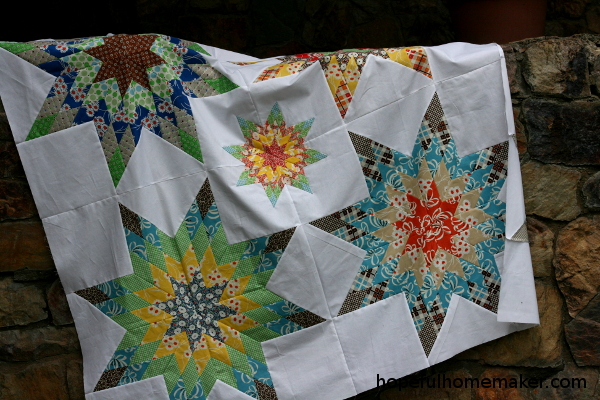 Without doubt, during that “twinkling” there will be plenty of life to live.  May we all live it well!